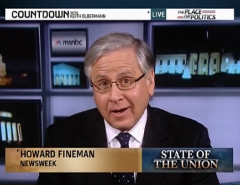 As such, it only seems fitting that as many of Newsweek's employees flee the transitioning ship, Howard Fineman would go to the unashamedly far-left leaning Huffington Post.

Makes you wonder if he'll still feign any air of objectivity in his new position reported by the New York Times Sunday:

Howard Fineman, one of the more recognizable pundits on cable television and a correspondent for Newsweek for 30 years, is leaving the magazine to become a senior editor at The Huffington Post. [...]

Mr. Fineman said that he relished the opportunity that moving to an online platform afforded him. "It really wasn't a difficult decision at all once I really began to think about it because this is where the action is," he said. "The chance to dive head long into the future is one that I don't think anyone could pass up."

Mr. Fineman, who will begin his new job this week, will become senior politics editor, overseeing and steering The Huffington Post's political coverage from its Washington bureau. He will remain a paid analyst for MSNBC, but will have to discontinue his column for MSNBC.com.

So, he's now going to be a senior editor "overseeing and steering The Huffington Post's political coverage from its Washington bureau" while remaining "a paid analyst for MSNBC."

But his reporting will be totally impartial.