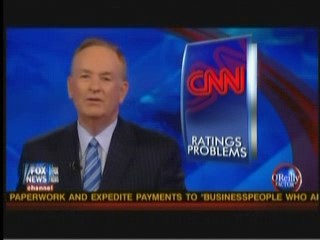 As NewsBusters reported Monday, Sanchez on the program bearing his name took issue with the announcement that FNC had won a coveted front row seat in the White House briefing room.

"Well, I understand the Associated Press," said Sanchez. "I even understand Bloomberg, but don't you have to be a news organization to get that seat?"

On Tuesday's "O'Reilly Factor," the host struck back (video follows with transcript and commentary):

BILL O'REILLY, HOST: On the pinhead front, as you may notice, CNN is having terrible -- and I mean terrible -- ratings problems. Originally, they moved a new guy into the 8 p.m. slot. Obviously, that was to replace Campbell Brown. Well, things have gotten off to a very shaky spot. His ratings are down 41 percent from Ms. Brown's, year to year. So there is some venting going on about FOX News getting a front row seat at the White House.

RICK SANCHEZ, CNN ANCHOR: I understand the Associated Press. I even understand Bloomberg. But don't you have to be a news organization to get that seat?

UNIDENTIFIED MALE: Are you saying FOX is not a news organization?

O'REILLY: Not gloating. I can't. Pinhead? Yes, no doubt.

As a point of clarification, the Sanchez segment in question happened during Monday's 4PM installment of "Rick's List" and not during the 8PM edition.

Of course, since nobody watches Sanchez's prime time show, who would have noticed the discrepancy?

After all, Rick only garnered 400,000 viewers Monday evening.

As such, maybe Sanchez ought to figure out a way to get people to watch his show before mocking a competing outlet that's trouncing him and his network in the ratings each and every day.