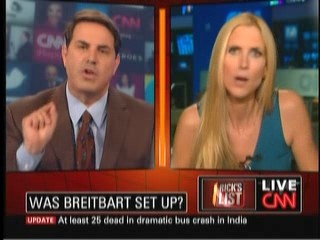 Conservative author Ann Coulter was Rick Sanchez's guest on the prime time edition of "Rick's List" Friday, and the sparks were flying.

After showing a clip of Coulter earlier in the week claiming that Andrew Breitbart was set up with that partial video of Shirley Sherrod speaking at an NAACP function in March, Sanchez asked, "Look, doesn't Breitbart deserve to lose his credibility for this?"

When Sanchez replied, "You're playing games. You're playing semantics," the battle was on (video follows with transcript and commentary):

RICK SANCHEZ, HOST: I want you to take a look at this video now. It's an emotional reunion today in Georgia between Shirley Sherrod and the Spooners. They are crediting Sherrod with helping save their farm. Of course, it all started when conservative blogger Andrew Breitbart posted the edited portion of Sherrod's speech online. And the rest as we say is history. Breitbart is one of the few folks involved in this whole mess that has not apologized, has not apologized to Shirley Sherrod.

But one person thinks Breitbart is a victim here. I want you to take a listen to Ann Coulter on FOX News two nights ago.

ANN COULTER: The whole key to this story is that Andrew Breitbart was set up. He was sent a tape that as we now know was massively out of context. I think Breitbart ought to reveal his source, because he was set up. This was a fraud.

SANCHEZ: Ann Coulter is a frequent guest on our show. And she joins me tonight in prime time.

Ann, thanks for coming back.

COULTER: Well, that was a surprise. I guess that's what we're talking about, Rick.

SANCHEZ: Let's do that.

Look, doesn't Breitbart deserve to lose his credibility for this? It doesn't matter who sent it to a man. What matters is he published this stuff, something that turned out to be wrong.

What made it out of context was, when you saw the full 45-minute speech, she then explained, as everyone, the entire world, now knows that she came around, she changed her mind, that was the wrong thing to do. It wasn't a doctored tape. It wasn't an edited tape. It was an excerpted tape. And we're constantly hearing public figures who are caught telling dirty jokes.

COULTER: And they say, oh, that was taken out of context.

This was literally taken out of context.

SANCHEZ: Ann, you're playing semantic games, and you know it.

COULTER: No, I'm not. There's a big difference.

SANCHEZ: Yes, it does. The only thing -- the thing that matters to those of us who practice this craft, you and myself, those of us who make money communicating with people, is truth. And, in the end, that's the only thing that we should be talking about, not whether one word was taken here or one word was taken -- if, in the end, the whole of your argument, the whole of what you just delivered is true or not true, that's what you should be judged by.

How am I wrong?

Maybe Sanchez should chat with his colleague Howard Kurtz who last Sunday claimed on CNN's "Reliable Sources, "Sound bites are compressed on television every day."

If sound bite compression at CNN doesn't invalidate the point one host is making, another host shouldn't complain about a website using excerpts from videos to prove its point.

More importantly, what seems to be lost here is that all Breitbart did was publish a video at Big Government. He didn't call for anyone to be fired over what was posted. Instead, he published it as an example of a double standard as it pertains to racism, a point Coulter would echo:

This is correct. The NAACP posted the full video at its website AND YouTube on Tuesday, July 20, only one day AFTER it condemned Sherrod for her statements.

As such, if this civil rights group had this video in its possession, why didn't it examine her full speech BEFORE condemning her? If the NAACP HAD seen the full video and came out supporting her on Monday rather than condemning her, the White House mightn't have pressured her to resign.

Shouldn't that have been their responsibility as a civil rights organization?

Somehow folks in the media including Sanchez have missed that hypocrisy:

COULTER: And if we could get back to your claim that what you care about is the truth, why do you keep repeating the despicable lie that John Lewis was called the N-word 15 times on Capitol Hill at the anti-Obama protest? That is a lie.

And you have repeated that. All these -- all these -- this network repeats it. All these networks repeat it. That is a lie. At least Shirley Sherrod got her reputation back.

SANCHEZ: Well, there were several there who have actually said that. They said it in a press conference.

And that's all that matters? Some members of Congress claim that racial epithets were shouted at them and members of the media should parrot it without determining if it's at all factual?

Kind of makes a mockery of Sanchez's entire point concerning edited videos as well as his prior claim, "The only thing -- the thing that matters to those of us who practice this craft, you and myself, those of us who make money communicating with people, is truth."

If you were honestly interested in truth, Mr. Sanchez, you'd make sure that what a politician says is true before you repeated it to your viewers as if it's the Gospel:

SANCHEZ: But let me come back to the matter at hand there.

That reward has been out there for three months.

SANCHEZ: And you're convinced that because no one has taken the money that it didn't happen?

SANCHEZ: All right. You and I are not going to solve that, because I wasn't there and neither were you. And all we have done is attributed what some people have said.

SANCHEZ: We will wait for that person to come in with -- and accept the $100,000 reward and see if that happens.

Fascinating. So because no one has come forward to prove the N-word was actually shouted at members of Congress that day, it's okay for Sanchez and others in the media to say that it happened? Shouldn't it be the other way around?

COULTER: Well, how long do you wait? You have made an accusation that a great civil rights hero was called the N-word. There were cameras all over.

SANCHEZ: You're trying to prove a negative. And I want to get back to this point, all right?

COULTER: More evidence than that.

SANCHEZ: I want to go back to the assertion that you make that, in fact, it wasn't Andrew Breitbart's fault for putting out that information because it's really the fault of the mystery person who sent him the information. Do you stand by that?

COULTER: Look, I don't know the details of this.

What I know is what was played -- and I never said anything about it. I wasn't on TV on Monday. On Monday, what people saw, what I saw, what you saw, what the White House saw, what the NAACP saw, and what Andrew Breitbart saw was a racist statement.

It was literally taken out of context, where, when you see the full speech, you see she's walking it back. It's like she's at an AA meeting talking about getting drunk, and now she doesn't get drunk anymore. She is saying she had these racist feelings toward a farmer and she was in a position of power.

That's why the White House fired her. I mean, they're the ones you should be haranguing. I didn't fire anybody. I didn't denounce her like the NAACP. And I didn't have a copy of the full video, the way the NAACP did.

SANCHEZ: Let me ask you the question one more time, Ann. Did you defend Andrew Breitbart and put the blame when you were on FOX News on whatever person it was who sent him the tape? Did you do that? Because it sounded to me when I heard that sound bite like that that's what you were doing.

COULTER: Yes, you saw what I said.

COULTER: I suspect someone was trying to play him, but I don't know. That's my suspicion because that was the part of the video he had. And he didn't have the full video, the way the NAACP did.

But if you really want examples for accusations of racism being taken out of context, how about all these photos of white men carrying guns allegedly at Obama rallies, and then you expand the photo and it turns out it's a black man?

SANCHEZ: You're changing the subject.

COULTER: And all the networks keep showing the photo of the gun.

Well, because, usually, when someone is falsely accused of racism, it's a conservative, and, usually, they don't achieve sainthood within 24 hours, as Shirley Sherrod is. I feel sorry for her, but not as sorry as I feel for the other ones.

Bingo. But wait, because it's going to get better:

SANCHEZ: Here's an example of where you may possibly be a little hypocritical on this thing.

COULTER: I don't think so.

SANCHEZ: Well, let me take you back to something you did. When Dan Rather was accused of using a source that was questionable regarding a story he did about President George Bush, you wrote, "Dan knew he was foisting forgeries on the nation to try and change a presidential election."

Can you have it both ways, Ann, my friend?

Amazing. Sanchez actually equated a broadcast network news program that typically attracts millions of viewers to a website that most Americans have never heard of:

COULTER: Yes, you can, because, yes, there does need to be some due diligence in news organizations.

Exactly. Rather at the time worked for CBS News and was anchor of the CBS "Evening News." The onus upon him, his production staff, and CBS to relay facts to the American public is far greater than on some little-known website that is offering conservative opinion to its readers.

COULTER: And if you read the full column, it was well known that Dan Rather's source was not trustworthy. He literally was foaming at the mouth in a meeting with "The Washington Post," as described...

All I know is what Breitbart has. I'm making an educated guess, because that was -- Breitbart put up all of the tape he had. And I think we're spending way too much time on something.

OK, a bad thing was done to Shirley Sherrod on Monday, but she's a saint today. She's Mother Teresa.

Exactly, for something else that has been missing in this entire discussion is the difference between how liberals and conservatives are treated when accused of racism.

As Coulter pointed out, Sherrod is now a saint. She's probably going to have books written about her, maybe even a movie, and likely will end up with statues erected in her honor.

Does that ever happen to a conservative put in a similar position?

If you don't know the answer, just ask Trent Lott.

Those that are interested can view a fuller video version of Coulter's discussion with Sanchez at The Right Scoop.