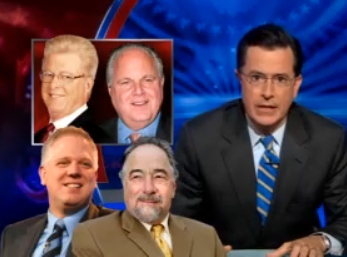 Welcome to the Bizarro World of today's liberal comedian that doesn't understand the difference between news and opinion, and can't distinguish a talk radio host from a member of the White House press corps.

But this is common for modern day media members who equate anti-Semitic and/or racist comments by folks charged with reporting the news to remarks they find offensive from people on the radio.

Making matters worse is the number of Comedy Central viewers that actually rely on Colbert and colleague Jon Stewart as their primary source for information on current events.

It would indeed be laughable if it wasn't so frightening.