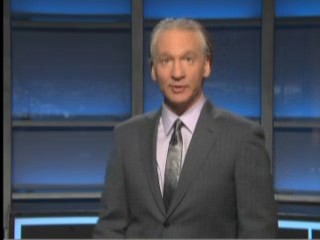 During the opening monologue of HBO's "Real Time," Maher mocked something Limbaugh mentioned on his show about the leaking oil rig in the Gulf of Mexico possibly having been attacked by environmentalists.

"That's right, a secret team of hippie frogmen snuck on board an oil rig in the Gulf of Mexico and blew it up to frame the oil companies," Maher quipped.

Next came the cheap shots: "You know what Rush, how many pills is your maid giving you?...Congratulations, Rush Limbaugh, you are now officially the Louis Farrakhan of white people" (video follows with transcript and commentary):

BILL MAHER, HOST: So Rush Limbaugh today said that the oil rig could have been deliberately sabotaged by environmentalists to make oil companies look bad. That's right, a secret team of hippie frogmen snuck on board an oil rig in the Gulf of Mexico and blew it up to frame the oil companies. You know what Rush, how many pills is your maid giving you? Wow. Congratulations, Rush Limbaugh, you are now officially the Louis Farrakhan of white people.

For the record, this didn't happen on Friday; it happened Thursday.

More importantly, Maher was playing fast and loose with Limbaugh's words. Here's what he actually said:

RUSH LIMBAUGH: I want to get back to the timing of the blowing up, the explosion out there in the Gulf of Mexico of this oil rig. Since they're sending SWAT teams down there now this changes the whole perspective of this. Now, lest we forget, ladies and gentlemen, the carbon tax bill, cap and trade that was scheduled to be announced on Earth Day. I remember that. And then it was postponed for a couple of days later after Earth Day, and then of course immigration has now moved in front of it. But this bill, the cap-and-trade bill, was strongly criticized by hardcore environmentalist wackos because it supposedly allowed more offshore drilling and nuclear plants, nuclear plant investment. So, since they're sending SWAT teams down there, folks, since they're sending SWAT teams to inspect the other rigs, what better way to head off more oil drilling, nuclear plants, than by blowing up a rig? I'm just noting the timing here.

From The Hill, about the Senate bill: "Sierra Club chief Michael Brune told The Hill's E2 Wire: 'We will go to the mat for defending Clean Air Act authority.' Brune also pointed to another potential stumbling block: offshore drilling. 'We will not be able to accept the dramatic giveaway that offshore oil drilling represents,' he said." The five hurdles the climate bill must clear, and one of them is offshore drilling. That's in TheHill.com.

As such, this wasn't about anyone trying to frame oil companies. Instead, Limbaugh was pointing out the bizarre coincidence of President Obama last month, much to liberals' chagrin, proposing an expansion of offshore oil drilling as part of the cap and trade bill that's been dead in the Senate since last year and an oil rig explosion shortly before Congress was going to take this issue up again.

But Maher wasn't done, for he then went after another famous conservative:

And of course Sarah Palin weighed in on this issue today. Not apologizing for drilling, it's now "Spill Baby, Spill." She does admit that when she prayed to Jesus to flood America with oil she should have been more specific.

And concluded with a bash at Arizona:

So, alright, I'll get off this. I don't know, it was just, it was just a crappy week for America. The oil spill making a huge mess, and Arizona deporting all the people who mop up.