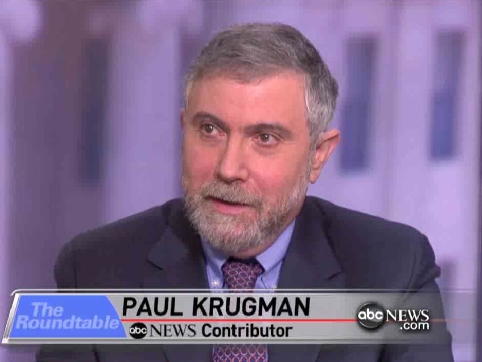 New York Times columnist Paul Krugman Friday posted a sarcastic piece at his "Conscience of a Liberal" blog with the headline, "The Oil Spill Is Obama's Fault."

"But you know that’s what the talk-show hosts will be saying soon, if they haven’t already started."

Will it be claims that liberals and/or scientific conspirators sabotaged the rig, to undermine good Americans who want to drillheredrillnow? [...]

Will it be that oil workers, demoralized by the march of socialism, fell into despair and let the accident happen?

Will it be claims that since this didn’t happen under Bush, it obviously shows that Obamanomics is responsible?

But what Krugman forgets to point out is that if this happened when Bush was President, the Left and their media minions INCLUDING ALL the New York Times writers, columnists, and editorial department would have ALREADY blamed it on the President.

So, SNARK AWAY, Mr. Krugman.

We learned under George W. Bush that ALL disasters are the President's fault INCLUDING the natural ones like hurricanes, tornadoes, floods, and droughts.

As a post facto aside, conservative talk radio host Mark Levin pointed out Thursday that it took the Obama administration eight days to do anything about this oil spill.

Why aren't media attacking Obama for this delay in much the same way they excoriated Bush for taking so long to respond to Katrina?

This seems to be a VERY important question given how the treatment of Bush by the press during and after that hurricane for all intents and purposes turned him into a lame duck only nine months into his second term effectively destroying his presidency.

The rapidly expanding environmental catastrophe caused by the oil spill off the coast of Louisiana is presenting a growing political challenge to the Obama White House, with Mr. Obama and his aides at pains to defend the response and forestall comparisons to the Hurricane Katrina crisis.

Nine days after British Petroleum's Deepwater Horizon oil rig blew apart and began spewing 5,000 barrels of oil a day into the Gulf of Mexico, a massive oil slick is set to wash ashore on the southern coast Thursday evening and, experts say, could dwarf the damage caused by the Exxon Valdez oil spill in Alaska.

Failure to get control of the relief effort and contain the environmental challenge could pose the same kind of political threat to Mr. Obama's popular standing that the much-criticized handling of the aftermath of Hurricane Katrina did for former President George W. Bush. And unlike Katrina, it is likely the federal government will be the clear lead authority in dealing with the BP spill.

With this in mind, as the disaster in the Gulf spreads, irrespective of what Krugman wrote today, why AREN'T so-called journalists asking WHY it took the Obama administration so long to respond to this environmental crisis?