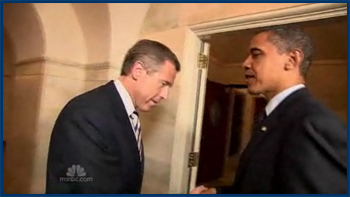 trary to how most of the President's sycophants saw his interview with Bret Baier Wednesday, a media critic from the Baltimore Sun felt it was "a textbook encounter of how the press should engage the executive branch of government."

"As much credit as I give Obama for taking his healthcare message to Fox News and staying on point, I also praise Baier for being thoroughly prepared and hitting a very difficult tone of being appropriately aggressive without being hectoring or rude," wrote David Zurawik Wednesday.

"Think of it as the antidote to NBC anchorman Brian Williams' bow to Obama in his prime-time White House special last year" (video of part one of the interview embedded below the fold, h/t TVNewser):

Zurawik was referring to Williams' June 2009 interview with the President when he bowed to Obama as he said good night.

Baier was asking the hard questions of a journalist, while Obama was already directing his answers to the historians -- trying to craft their narrative for them. Baier was impressive, nevertheless, in pushing the president on the special deals that were cut for such states as Louisiana, Florida and Nebraska -- and the near-total lack of transparency about them.

When the president insisted that "everybody knows" which deals will be in and which will be out in the legislation that Democratic leadership seems likely to try and pass in the House without an actual vote, Baier started going through the states one by one and asking Obama, "In or out?" And the president himself couldn't answer with any precision on at least two states. [...]

Still as a journalist and media critic, I salute Baier for putting the president to the test and respectfully challenging him on his contradictions and reversals -- and the subsequent flaws in the legislation he hopes to see on his desk in a matter of days.

Well, at least someone in the mainstream media thinks Baier did a good job.