Olbermann: Pro-Life Advocate Seems To Imply Palin Had An Abortion 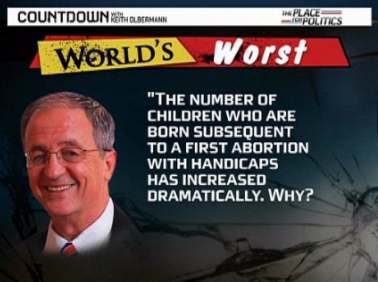 The media's Palin Derangement Syndrome hit new lows Monday when Keith Olbermann used a remark by a little-known Virginia state Delegate to suggest the former Alaskan governor had an abortion.

In his "Worst Person in the World" segment, the "Countdown" host recognized Bob Marshall (R-Va.) for his comments about abortion increasing the likelihood of handicaps in children born after the procedure was performed on their mother.

Much as the notorious "Family Guy" episode did recently, this reference to handicapped children disgustingly led Olbermann to bring Palin into the equation (video embedded below the fold with transcript, h/t Story Balloon):

Our runner up, Bob Marshall, Virginia state Delegate, representing Manassas. At a news conference opposing state funding for Planned Parenthood, Mr. Marshall announced, quote, "the number of children who are born subsequent to a first abortion with handicaps has increased dramatically. Why? Because when you abort the first born of any, nature takes its vengeance on the subsequent children. In the Old Testament, the first born of every being, animal and man, was dedicated to the lord. There`s a special punishment Christians would suggest."

Well, maybe. But what you`re suggesting is that challenged children are God`s punishment, which doesn`t even hold together, because it doesn`t explain why God is punishing women who haven't had abortions with special needs kids. Marshall`s statement is trouble for two politicians: Virginia Governor Bob McDonnell, who like Marshall wants to cut off funding for Planned Parenthood in the state, and of course little Ms. Umbrage herself, Sarah Palin, who Marshall apparently thinks is being punished for something. I mean, he seems to imply maybe she had an abortion. Your move, Mrs. Palin.

So, is it now acceptable to invoke Sarah Palin ANY TIME a reference is made to a handicapped child?

Honestly, does the media's hatred for this woman have any limits?