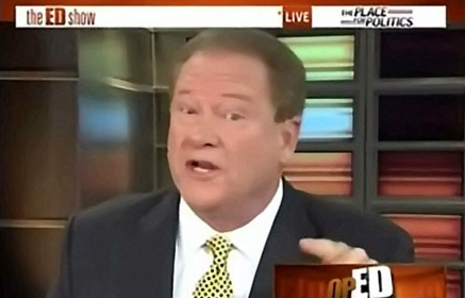 "I mean, five deferments and five heart attacks," Schultz continued. "That's a hell of a life, isn't it, Roy?" (video embedded below the fold with transcript, h/t Story Balloon):

ED SCHULTZ, HOST: Dick Cheney going to be released from a hospital in a day or two after suffering a minor heart attack. I wish the former Vice President a speedy recovery because he is now the poster child for healthcare in this country. Americans would love to have the same healthcare coverage that Dick Cheney has. Joining me now for all of that is Roy Sekoff, founding editor of the Huffington Post. I mean, five deferments and five heart attacks. That's a hell of a life, isn't it, Roy?

SCHULTZ: Roy, I think that the Democrats should use Dick Cheney as the example as to what the Republicans have been voting against all along. This is the kind of healthcare Americans could have if we went with President Obama's plan.

Honestly, the way liberal media members celebrate every time a well-known conservative has health problems is nothing less than staggering.