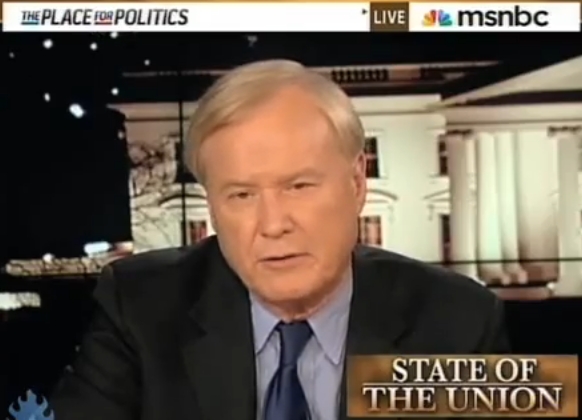 The tingle appears to be back for Chris Matthews, for shortly after Barack Obama finished his State of the Union address Wednesday, the "Hardball" host said he forgot the President was black.

Speaking with fellow MSNBCers Rachel Maddow and Keith Olbermann, Matthews gushed, "You know, I was trying to think about who he was tonight, and it's interesting: He is post-racial by all appearances."

He then amazingly added, "You know, I forgot he was black tonight for an hour" (video embedded below the fold with partial transcript, grateful assistance from our friend Story Balloon):

CHRIS MATTHEWS: You know, I was trying to think about who he was tonight, and it's interesting: He is post-racial by all appearances. You know, I forgot he was black tonight for an hour. You know, he's gone a long way to become a leader of this country and passed so much history in just a year or two. I mean, it's something we don't even think about. I was watching, I said, "Wait a minute. He's an African-American guy in front of a bunch of other white people, and there he is, President of the United States, and we've completely forgotten that tonight. Completely forgotten it."

I think it was in the scope of his discussion, it was so broad-ranging, so in tune with so many problems and aspects, and aspects of American life that you don't think in terms of the old tribalism, the old ethnicity. It was astounding in that regard, a very subtle fact. It's so hard to even talk about it. Maybe I shouldn't talk about it, but I am. I thought it was profound that way. And, I think in terms of the seduction tonight.

Sure seems Matthews got that tingle going up his leg tonight, doesn't it?

As a humorous aside, Salon's Joan Walsh tweeted the following moments before the MSNBCer went into full gush mode: "Prediction: Chris's leg is tingling, hard!"

*****Update: Matthews clarified his comment a bit later on the "Rachel Maddow Show"...

I'm glad he cleared that up.