David Gregory Bashes Republicans As 'The Party of No' 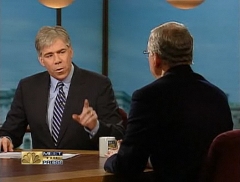 After his largely friendly discussion with senior White House adviser Valerie Jarrett, the "Meet the Press" host abruptly changed his tone and manner with the very first question to McConnell, "Is there one Republican who will support any Democratic healthcare initiative?"

Gregory continued to press his guest: "So let me just be clear. There is not one Republican that would vote for any Democratic healthcare reform initiative that's out there now?"

When he didn't get the answer he wanted, Gregory concluded, "So it sounds like the party of no charge is well deserved" (video embedded below the fold with transcript):

Leader, welcome back to MEET THE PRESS.

MR.  GREGORY:  Is there one Republican who will support any Democratic healthcare initiative?

SEN.  McCONNELL:  Well, what we really need to do is start over.  I mean, I--the message in Massachusetts was absolutely clear.  The exit polls that I looked at said 48 percent of the people in Massachusetts said they voted for the new senator over health care. Only 5 percent mentioned any other issue. The American people had a victory in Massachusetts, and they were sending us the message "stop and start over."

The first thing we ought to do is go back to what the president said in 2007, let's have the C-SPAN cameras in the room.  Number two, let's concentrate on cost, which is what the American people would like us to address.  And a good place to start there is with junk lawsuits against doctors and hospitals, which were not even a part of the proposal.  Absolutely, it's time to start over and go step-by-step to address the issue that the American people thought we...

MR.  GREGORY:  So let me just be clear.  There is not one Republican that would vote for any Democratic healthcare reform initiative that's out there now?

SEN.  McCONNELL:  Well, this comprehensive bill?  Of course not.  You know, the American people are overwhelmingly opposed to it.

MR.  GREGORY:  ...the party of no charge is well deserved.

MR.  GREGORY:  So what elements of the president's reform plan would you keep as part of comprehensive healthcare reform?

MR.  GREGORY:  Well, we've been discussing it for months now.

SEN.  McCONNELL:  Well, the problem is we haven't been a part of the discussion.  We've had a number of different ideas, none of which are in the bill.

MR.  GREGORY:  How many Republicans were negotiating on the Finance Committee?

MR.  GREGORY:  Right.  So weren't they part of the process from the start?

SEN.  McCONNELL:  Yeah.  But it's not just about talking, it's about what you end up with.

MR.  GREGORY:  What did they say yes to in the course of that negotiation?

MR.  GREGORY:  So tick off the top three points of the Republican plan for, for healthcare reform.

SEN.  McCONNELL:  First, you do have to do it on a bipartisan basis.  You put the C-SPAN cameras in the room, as the president said.  You start with junk lawsuits against doctors and hospitals, interstate competition among insurance companies, and many of my members would be looking--would be willing to look at equalizing the tax code.  Right no w if you're a corporation and you provide insurance for your employees, you get to deduct it on your corporate tax return.  But if you're an individual on the individual market, you don't. Step-by-step to work on the cost problem.  That's what Republicans are willing to do.

SEN.  McCONNELL:  Expanding coverage is a good idea.  But even under this $2.5 trillion monstrosity, they still didn't end up covering everybody.  That is easier said than done.  But if you equalize the tax code, you make it more possible for more people who are currently uninsured to, to purchase insurance.  Right now they have no tax incentive to do it.  And a lot of young people look at the situation, say, "Gee, I'm going to live forever, why should I buy it?"

SEN.  McCONNELL:  This particular bill deserves to be stopped.  What we need to do is start over and get it right.

SEN.  McCONNELL:  Well, the Democrats are in the majority.  They have the White House, they have the House, they have the Senate.  They have to decide whether they want to listen to the voices of the American people.  All the surveys all across the country--and even in the most liberal state in America, arguably, Massachusetts--the people are telling us, "Please don't pass this bill." Now, if they get past this arrogant phase that they've been stuck in for about a year that, "We know best.  We don't want to listen to public opinion here, we want to `make history,'" if they can work their way past that and concentrate on the real problem, which is the cost, we're willing to look at it.  But I think we need to be concentrating on the economy.

Look, we passed a stimulus bill.  The, the goal there was to keep unemployment at 8 percent.  It's now 10 percent, in my state 10.6 percent.  Let's concentrate on what the American--you showed the survey earlier in your program of what people would like for us to be working on, and that's job creation.

MR.  GREGORY:  I just--before we get to, to jobs, I just want to ask you quickly, it sounds like you're saying there still may be some, some reason for hope here, that the president can cobble together and agreement to actually get healthcare reform through.  Is that your view?

SEN.  McCONNELL:  What I, what I hope is that this current bill that we've had on the table is finished, over.

MR.  GREGORY:  Right.  But you're not pronouncing it finished.

SEN.  McCONNELL:  Well, the majority ought to make that--reach that decision. It ought to be over.  The American people are telling us, "Please stop trying to pass this."