Reid After Trent Lott's Resignation In 2002: 'He Had No Alternative' 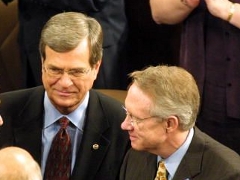 "He had no alternative," said Reid at the time claiming, "If you tell ethnic jokes in the backroom, it's that much easier to say ethnic things publicly. I've always practiced how I play."

As liberal media members work overtime to spin racist comments Reid made about presidential candidate Barack Obama in 2008, it's going to be very interesting to see how many recall Lott's resignation or what Reid said about the incident.

"He had no alternative," the Nevada Democrat and Senate minority leader said. "Senator Lott dug himself a hole and he didn't dig it all in one setting. He dug it over the years. And he couldn't figure out a way to get out of it." [...]

Lott said that Mississippians were proud to have voted for Thurmond in 1948 on the pro-segregationist Dixiecrat ticket.

Asked if the episode would serve as a warning to weigh his own words carefully, Reid said: "You play how you practice."

"If you tell ethnic jokes in the backroom, it's that much easier to say ethnic things publicly. I've always practiced how I play."

So Reid has always practiced as he's played?

Well, then maybe media members who hounded Lott until he resigned his leadership role in 2002 should reference what Reid said at the time and force him to practice as he plays now.