Rock The Vote Encourages Youth To Use Sex To Pass ObamaCare 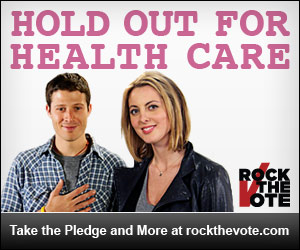 The political advocacy group "Rock the Vote" has a new video out encouraging young people to abstain from having sex with folks opposed to healthcare reform.

Sadly, this isn't your run of the mill call for celebacy, for the video also instructs youth to use sex to get people to change their minds on this issue.

The group's YouTube posting asks: "What would you withhold from someone who opposes health care reform? Cookies, a Christmas gift, sex?"

Pretty racy for an organization whose mission is to "give young people the tools to identify, learn about, and take action on the issues that affect their lives, and leverage their power in the political process" (video embedded below the fold contains excessive vulgarity, h/t Story Balloon):

For those unfamiliar, two of the primary participants in this video are Eva Amurri and Zach Gilford from television's "Californication" and "Friday Night Lights" respectively.

Amurri is Susan Sarandon's daughter that just so happens to play a student who moonlights as a stripper on "Californication."

Of course, cynics might say this is all a joke. After all, the video was created by the folks at Funny or Die.

But, if this is satire, why is there a pledge at RTV's website?

We pledge ourselves to the health and liberty of young Americans. We pledge to educate ourselves and to stand with those who fight for us and against those who do not. We demand health care, and we are willing to hold out for it.