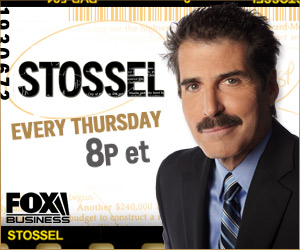 To kick off his new show Thursday, Stossel chose the controversial subject of climate change, and invited on a number of guests to address the issue in great detail.

According to an e-mail message sent to Stossel's producers on November 23, "the growing influence of the climate crisis message and the demand on Mr. Gore's time" made it impossible for the former Vice President to attend.

Of course, Gore's busy schedule didn't prevent him from being interviewed by CNN and MSNBC on Wednesday, nor did it stop him from appearing on NBC's "Saturday Night Live" just two days before he declined Stossel's invitation.

I guess even an esteemed Nobel Laureate has to understand his limitations (video embedded below the fold with partial transcript):

JOHN STOSSEL, HOST: I wish that Al Gore were here to debate him (Jerry Taylor, Energy Analyst for the Cato Institute) and me. We asked Vice President Gore, and his office sent this e-mail saying: "It's very difficult to decline invitations such as yours, but it's an unfortunate inevitability of the growing influence of the climate crisis message and the demand on Mr. Gore's time. (Boos from audience) We do apologize, but thank you for your interest." (Via email 11/23/09).

Come on, Mr. Gore. The idea that you don't have time is pretty silly. You have time to go on programs like "Saturday Night Live." It's not a time issue. (Applause) Truth is, you won't debate anyone. You've been asked lots of times, but you always say no. But if you do ever want to debate, we'd love to offer you the air time. We will give it to you. I'll give you a special phone number that goes to this phone. Glenn Beck has that red phone that goes to the President. For you Mr. Gore, the green phone. I await your call.

Of course, Stossel was quite right: despite claiming to be an expert on this subject, Al Gore refuses to debate anyone. And, he only goes on television programs where he knows he can say whatever he wants, regardless of accuracy, and never get challenged.

Such is what happened when he appeared with CNN's John Roberts and Kiran Chetry Wednesday morning, and with MSNBC's Andrea Mitchell Wednesday afternoon.

That media not only comply with Gore's ability to present unchallenged falsehoods to the nation, but also let him get away with never being on the air with anyone that disagrees with his views, is nothing less than appalling.

That said, Stossel shouldn't hold his breath waiting for this charlatan's call.

Gore's got the media in his back pocket, and he'll never voluntarily relinquish control.