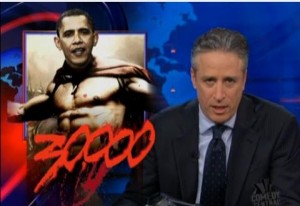 In the opening segment of "The Daily Show," Stewart asked, "[I]s 30,000 troops the military equivalent of two Advil?"

From there, Stewart used videoclips to show just how much Obama's speech resembled what Bush said more than two years ago concerning Iraq.

"The Daily Show" host also surprisingly demonstrated how people on both sides of the aisle -- politicians and pundits alike -- hated what Obama had to say (video embedded below the fold with partial transcript, h/t Story Balloon):

JON STEWART, HOST: We begin tonight in 2007. Our war in Iraq was going badly. So President Bush proposed a bold new strategy: a surge of nearly 30,000 troops. Flash forward, the war in Iraq seems to have stabilized, but the war in Afghanistan is going badly. This time, the problem will be tackled by a bold, new leader, with the audacity to change, hope, and do what we were waiting for which, YES WE CAN! What shall his answer be?

PRESIDENT BARACK OBAMA: I have determined that it is in our vital national interests to send an additional 30,000 U.S. troops to Afghanistan.

STEWART: What the 30? What, is 30,000 troops the military equivalent of two Advil? No matter what the problem there? What, you got a problem there in Afghanistan? 30,000 troops. If it doesn't work, call my service. Unless they've gotten to him. Maybe he's giving the same surge speech Bush gave? No, that's crazy, Jon. That can't be happening. If that were the case, he would open with some kind of 9/11 reference.

STEWART: (With picture of Rudy Giuliani on the screen): Oh, don't worry, he said 9/11. You'll get your nickel. He gets a nickel. Now, at least (Picture of shirtless Obama with cape appears on the screen) we didn't even have to Photoshop his chest. Well, at least Obama isn't dipping into Bush's well-worn bucket-o-fear.

STEWART: (Wearing gas mask) I'm sorry, what was that? I didn't hear anything after you said "extremists within our borders." If he were really channeling Bush, we'd hear some of that absolutist rhetoric. "Our cause is just, our resolve unwavering."

OBAMA: Our cause is just, our resolve unwavering.

STEWART: (After long, incredulous pause) Why don't you reference vague, unnamed critics, defensively knock them down?

OBAMA: There are those that suggest Afghanistan is another Vietnam. I believe this argument depends on a false reading of history.

STEWART: What the f**k? Although to be fair to the President, there are people saying that Afghanistan is another Vietnam - CHARLIE. President said it's not another Vietnam. It's a false reading of history. What do you say to that?

CHARLIE, STUDIO WORKER: What does he know? He wasn't in the s**t with the rest of us.

STEWART: I don't know why he always talks about that. Charlie, you're barely 50, you've never even been out of Canarsie. Why, why do you talk like that?...It's all real. Alright, we're almost home. All you need now to fill out the Bush card is a not so subtle Freudian gaffe.

OBAMA: Today, after extraordinary costs, we are bringing the Iraq War to an irresponsible end.

STEWART: Irresponsible end? How are you going to sell healthcare? "As far as my healthcare plan, all your doctors and purses will be paid for. Ah! I meant nurses. Damn it." Is there at least something in the speech that shows you're a different kind of war president?

OBAMA: We can't simply afford to ignore the price of these wars. Our troop commitment in Afghanistan cannot be open-ended, because the nation I am most interested in building is our own. These additional American and international troops will allow us to begin the transfer of our forces out of Afghanistan in July of 2011.

STEWART: "Our resolve is unwavering, but it turns out our Discover card is over the limit." So bottom line, last night, alright, he wasn't necessarily Bush, but he wasn't the communist, Kenyan Obama we've heard so much about lately. Now it's time to turn the analysis over to our vaunted fourth estate. Not vaunted, what's the word I wanted use here, televised f**kbuckets. (Picture onscreen of Giuliani) You get a nickel for that too? You own the phrase f**kbuckets? CNN covered the surge speech by staging a surge in their own studio, deploying roughly 30,000 pundits in their new "Situation" coliseum. Apparently they think a surge is a great strategy for any failing enterprise. I'm kidding, I'm kidding. CNN, you're doing a great job. Let's not bother examining every network, let's just go to the only two schools of thought represented by them. Alright, the right: they hate Obama because he's always style over substance. Let's see how this speech played with them.

STEPHEN HAYES, WEEKLY STANDARD: I think it was one of the worst speeches I could imagine in support of a right policy decision.

KARL ROVE ON FOX: It was badly delivered.

UNKNOWN WOMAN ON FOX: He was aspirational rather than being inspirational.

ROVE: I think he might need a new teleprompter with some Energizer bunny batteries in it.

STEWART: I'm sensing a no one. By the way, wasn't the Gettysburg Address, c'mon. The guy like choked on a pretzel. Alright? C'mon. By the way, my guess is that if Fox News was around in Lincoln's time, they'd s**t all over that speech. "Oh. Four score and seven years ago. Slow down, Harvard. Real Americans say 87." Alright, so the Right is bummed out. Well, then according to the fundamental laws of political Newtonian physics, the Left has to be elated.

REP. DENNIS KUCINICH (D-OHIO): The United States has to get out of Afghanistan.

ED SCHULTZ, MSNBC HOST: A lot of Afghanistans don't want us there.

REP. MAXINE WATERS (D-CALIFORNIA): What do we do? Do we have to kill all the Taliban?

REP. BARBARA LEE (D-CALIFORNIA): I worry that the 30,000 troops in terms of the escalation will just fuel the insurgency.

STEWART: Wow. So the Right hated the style and the Left hated the substance. (Referring to picture of Rep. Barbara Lee on the screen) By the way lady, what did you tell your hairdresser? "Give me the Statue of Liberty?" BOOM. BOOM.

So, for the second night in a row, Stewart went after a highly favored liberal icon; on Tuesday, "The Daily Show" host skewered Al Gore over the growing ClimateGate scandal.

Is this a trend in the making?