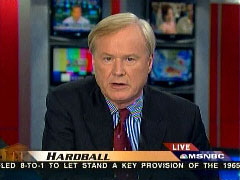 The attacks on former Alaska Governor Sarah Palin took an interesting turn Wednesday when MSNBC's Chris Matthews suggested that racism is at the heart of her support.

Much like mainstream media coverage of this year's Tea Parties, Matthews and "Hardball" guests Norah O'Donnell and Salon's Joan Walsh made an issue of how "white" the crowd was at a Palin book signing event in Michigan.

"This is a largely white -- almost no minorities in this crowd," reported MSNBC's O'Donnell live from the scene.

Matthews reiterated, "Well, they look like a white crowd to me," later claiming, "I think there is a tribal aspect to this thing, in other words, white vs. other people."

Walsh added, "I think you`ve got that same kind of paranoid tea party, maybe even birther crowd that talks about the Constitution, without really understanding what they are talking about" (video embedded below the fold with transcript, h/t Greg Hengler via NBer Thomas Stewart):

CHRIS MATTHEWS, HOST: Welcome back to HARDBALL. Sarah Palin`s book tour is under way up in Michigan tonight. What exactly is she out there stumping for? Is it for political office or something else?

MSNBC`s Norah O`Donnell`s covering Palin`s stop up in Grand Rapids tonight. And we also have Joan Walsh, who`s editor-in-chief of Salon.com. Thank you very much.

Norah, what are the people -- can you find out what their belief is in Governor Palin? What is it they like about her, apparently?

NORAH O`DONNELL, NBC CORRESPONDENT: They have a connection with her, and I think it`s an emotional connection. A lot of the people I spoke with today were unable to articulate exactly why they supported Sarah Palin. One of them said it was because she upholds the Constitution, was confused and thought that Sarah Palin had opposed the bail-out, when in fact, Sarah Palin supported the bail-out. This is a largely white -- almost no minorities in this crowd. And they`re here because they love Sarah Palin. I think it`s an emotional connection, Chris because they feel, too, that they`ve been beat up on, whether it`s the economy or they feel like outcasts (ph). They like the outsider, if you will, in Sarah Palin. And that`s why people have been willing to wait, 1,500 of them, since 7:00 AM this morning to just get a glimpse of Sarah Palin, who, by the way -- this is not just a book signing, Chris. I mean, that`s kind of largely (INAUDIBLE) But she`s about to arrive any minute, and there`s a stage out front where she`s going to take to that stage and make remarks, almost like a mini-campaign rally.

MATTHEWS: Well, they look like a white crowd to me. Let`s go back to Joan Walsh. Not that there`s anything wrong with it, but it is pretty monochromatic up there.

Joan, no surprise in terms of the ethnic nature of the people showing up. Nothing wrong with that. But it is a fact. Let me go to this intramural -- the nastiness -- and I want to get back to Norah on this, Norah covered the campaign and -- the nastiness of this, the attacks on you might call them the "little people," Steve Schmidt, Nicolle Wallace, in the campaign. Here`s somebody who was governor of a state taking whacks in a published book, her only book, trashing little people, and at the same time, she`s looking out for little...

Here`s her quote. By the way, here is McCain defending his people. "There`s been a lot of dust flying around in the last few days, and I just wanted to mention that I have the highest regard for Steve Schmidt and Nicolle Wallace and the rest of the team, and I appreciate all the hard work and everything they did to help the campaign."

So he`s pushing back, Joan.

JOAN WALSH, SALON.COM: Yes. You know, he was trying to stay out of it, Chris, for a few days. He was saying nice things about her. But when she insults his team like that -- and you know, I -- there are questions about who`s right, but they strenuously deny it, and other reporters who were around also deny her version of things. So, I think that there are a couple of whopping lies, as well as just a mean-spiritedness that doesn`t serve her well.

It`s why she will never be president. She is a very divisive, mean- spirited person. She is fighting down with her 19-year-old ex-future-son- in-law, who should really be ignored, if anything.

So, you know, I think you see a side of Sarah Palin -- Norah is right. People who love her love her. But the general public doesn`t trust her and sees this kind of mean girl persona that she`s never grown out of.

Norah did great reporting, by the way. I was watching when she interviewed these people who were wrong about TARP and who just started babbling about she will defend the Constitution, as though Obama won't.

WALSH: So, I think you`ve got that same kind of paranoid tea party, maybe even birther crowd that talks about the Constitution, without really understanding what they are talking about. They love her.

MATTHEWS: I`m just wondering, Norah, along those lines -- and you`re up there with the people -- you can talk to them, the -- that I think people like the sort of fisticuffs, that she is taking on these political types.

What do you think? What can you tell from talking to people?

O`DONNELL: You so right. Yes. You are so right. And she is the anti-politician, the outsider. She is not like those people -- as one man told me who has a Sarah Palin for president T-shirt on, that she was more qualified than the three other men who ran last year, talking about Barack Obama..

WALSH: I saw that.

O`DONNELL: ... Joe Biden, and John McCain. She -- he said she was more qualified than they were, because she has actually been a governor and run something, in his words.

WALSH: And quit, of course.

O`DONNELL: I think they are mad at the "Newsweek" cover. They think it`s sexist. They think that the media has beaten up on her. So, they sympathize and they connect with her, if you will, on that level.

But this tour, I think, though, Chris, also should scare the pants off some of those other Republicans who want to run for president in 2012. Why? Because there is this emotional connection. There are thousands of people that will turn out for her.

O`DONNELL: But, no doubt, she can be a force.

She says that she wants -- if people will have her, she wants a role in 2012. I think she is going to have this tour, and she`s going to get the bug, because there`s a lot of adoring fans out here.

MATTHEWS: OK. That is my hunch, too.

I think there is a tribal aspect to this thing, in other words, white vs. other people. I think she is very smart about this. Here she is on the issue of -- of what happened down at Fort Hood, obviously, an ethnic issue, as many people see it.

MATTHEWS: She sees it that way. Here she is going at him.

SEAN HANNITY, HOST, "HANNITY": Do you think Fort Hood was an act of terrorism?

And I think that there were massive warning flags that were missed all over the place. And it was quite unfortunate that, to me, it was a fear of being politically incorrect, to not -- I`m going to use the word -- profile this guy, profiling in the sense of finding out what his radical beliefs were.

Now, because I used the word profile, I`m going to get clobbered tomorrow morning. The liberals, their heads are just going to be spinning. They are going to say, she is radical. She is extreme.

But I say profiling in the context of doing whatever we can to save innocent American lives, I`m all for it then.

MATTHEWS: No. Profiling has a particular meaning.

Joan, you go at it. Everybody knows what profiling is.

MATTHEWS: We know what it means. If you come from a Middle Eastern country, keep your eye on this guy. Check him out.

If you really want a colorblind society, it should be blind to ALL colors shouldn't it?

As such logic continues to elude the liberal elite involved in most reporting, the likelihood of racism ever going away seems close to zero.

How sad for all of us.