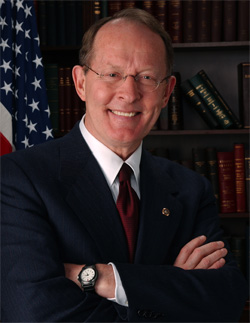 A top Republican Senator who used to work for President Richard Nixon has warned the Obama administration to not create an "enemies list" like that of his former employer.

Sen. Lamar Alexander (R-Tenn) in his speech on the Senate floor Wednesday listed a number of recent events that uncomfortably remind him of how the Nixon White House treated everyone in America that didn't agree with it:

If the President and his top aides treat people with different views as enemies instead of listening to what they have to say, they're likely to end up with a narrow view and a feeling that the whole world is out to get them. And as those of us who served in the Nixon administration know, that can get you into a lot of trouble.

Amongst other things, Alexander mentioned the Administration's attacks on Fox News (video embedded below the fold with transcribed highlights):

In 1971 Chuck Colson, who was then a member of President Nixon's staff and today is admired for his decades of selfless work in prison reform, presented a list of what he called "persons known to be active in their opposition to our Administration." He said he thought the administration should "maximize our incumbency . . . [or] to put it more bluntly, . . . use the available federal machinery to screw our political enemies." On that list of 20 people were CBS correspondent Daniel Schorr, Washington Star columnist Mary McGrory, Leonard Woodcock, the head of the United Auto Workers, John Conyers, the Democratic Congressman from Michigan, Edwin Guthman, managing editor of the Los Angeles Times, and several prominent businessmen such as Howard Stein, of the Dreyfus Corporation and Arnold Picker, vice president of United Artists. The New York Times and the Washington Post were made out to be enemies of the Republic. [...]

Now the only reason I mention this is because I have an uneasy feeling, only ten months into this new administration, that we're beginning to see symptoms of this same kind of animus developing in the Obama administration.

According to Politico, the White House plans to "neuter the United States Chamber of Commerce," an organization with members in almost every major community in America. The Chamber had supported the President's stimulus package and some of his early appointments, but has problems with his health care and climate change proposals.

The Department of Health and Human Services imposed a gag order on a large health care company, Humana, who had warned its Medicare Advantage customers that their benefits might be reduced in Democratic health care reform proposals-a piece of information that is perfectly true. This gag order was lifted only after the Republican leader, Sen. Mitch McConnell of Kentucky, said he would block any future nominees to the Department until the matter was righted.

The White House Communications director recently announced that the administration would treat a major television network, Fox News, as "part of the Opposition." On Sunday White House officials were all over talk shows urging other news organizations to "boycott" Fox and not pick up any of its stories. Those stories, for example, would include the video that two amateur filmmakers made of ACORN representatives explaining how to open a brothel. That's a story other media managed to ignore until almost a week later when Congress decided to cut ACORN's funding.

The President has not stopped blaming banks and investment houses for the financial meltdown even as it has become clear that Congress played a huge role, too, by encouraging Americans to borrow money for houses they couldn't afford. He was "taking names" of bondholders who resisted the GM and Chrysler bailouts.

Insurance companies, once the allies of the Obama health care proposal, have suddenly become the source of all our health care problems-because they pointed out, again correctly, that if Congress taxes insurance premiums and restricts coverage to those who are sicker and older, the cost of premiums for millions of Americans is likely to go up instead of down. Because of that insubordination, the President and his allies have threatened to take away the insurance companies antitrust exemption.

Even those of us in Congress have found ourselves in the crosshairs: The assistant Republican leader, Sen. Jon Kyl of Arizona, said to ABC's George Stephanopoulos that the stimulus plan wasn't working. The White House wrote the governor of Arizona and said, "If you don't want the money, we won't send it." Sen. McCain said that this could be perceived as a threat to the people of Arizona.

Sen. Bennett of Utah and Sen. Collins and I as well as Democratic Senators Byrd and Feingold all have questioned the number and power of the 18 new White House czars who are not confirmed by the Senate and have suggested that is a threat to constitutional checks and balances. The White House refused to send anyone to testify at congressional hearings. Sen. Bennett and I found ourselves "called out" on the White House blog by the President's communications director.

Even the president, in his address to Congress on health care, threatened to "call out" members of congress who disagreed with him. This behavior is typical of street brawls and political campaign consultants. It is a mistake for the President of the United States and the White House staff.

If the President and his top aides treat people with different views as enemies instead of listening to what they have to say, they're likely to end up with a narrow view and a feeling that the whole world is out to get them. And as those of us who served in the Nixon administration know, that can get you into a lot of trouble.

This administration is only ten months old. It's not too late to take a different approach - both at the White House and here in the Congress. [...]

Having once been there, I can understand how those in the White House feel oppressed by those with whom they disagree, how they feel besieged by some of the media. I hope the current White House occupants will understand that this is nothing new in American politics-all the way back to the days when John Adams and Thomas Jefferson exchanged insults. The only thing new is that there are today multiple media outlets reporting and encouraging the insults 24 hours a day.

As any veteran of the Nixon White House can attest, we've been down this road before and it won't end well. An "enemies list" only denigrates the Presidency and the Republic itself.

Given the utter contempt today's media have for Nixon, it's going to be very interesting in the coming days to see how Alexander's warning gets covered.

This is especially the case given how some press members have bought into the Adminstration's line concerning its opposition, in particular ABC's George Stephanopoulos who asked White House senior adviser David Axelrod Sunday, "Are you worried that your strategy is fortifying your enemy?"