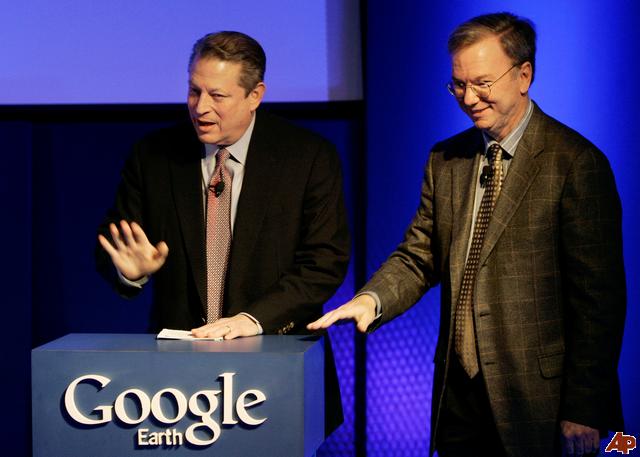 Such was reported by the New Yorker in its October 12 issue (subscription required).

By themselves, the following paragraphs from this 6500-word piece don't mean much.

However, given the ongoing concerns about Google's political leanings and how its search algorithms might be manipulated to favor liberal news outlets over conservative points of view, the very idea that Gore might have had any input to this process is worrisome to say the least:

Whatever obstacles arise, there's little doubt that Google will remain a dominant force. While rivals like Steve Ballmer, the C.E.O. of Microsoft, may label Google "a one-trick pony," [CEO Steve] Schmidt has a ready rejoinder: "I like the trick!" Google's search engine was responsible for ninety-eight per cent of the company's twenty-two billion dollars in revenues and $4.2 billion in net profits last year, and Google today accounts for almost seventy per cent of the world's Internet searches. Schmidt added, "The Google model is one-trick to the extent that you believe targeted advertising is one trick." And if Google can find a way to sell advertising on YouTube, on mobile phones, and through its cloud-computing programs, Schmidt says, Google could become the first media company to generate a hundred billion dollars in revenues, more than twice as much as any of the world's biggest media companies: Time Warner, the Walt Disney Company, and News Corp.

Google's achievement of this goal depends in no small measure on the restless, we-are-never-satisfied energy of its founders and its engineers. Al Gore recounted a conversation he had with [co-founder Sergey] Brin and [co-founder Larry] Page several years ago in the conference room near their office. Gore raised specific concerns about aspects of search quality. "They had to go to another meeting," Gore recalled, "and said, 'If you can stay, Al, we'd like to bring in the search-quality researchers and specialists in charge of this part of the business.' Ten of them came in. Larry and Sergey left. I spent another three hours. And then, when it was over, I gave Larry and Sergey an oral report."

Some weeks later, Gore said, laughing, "I went up to their office and found that all ten of these people had been moved in. All ten of them!" He described how Page and Brin had had to cram twelve computer monitors into their office, and "move around some of their toys-a remote-control helicopter, flying messenger boards . . ." The researchers and specialists stayed-until Brin and Page "satisfied themselves that they had an ongoing system for maintaining hyper-vigilance." He added, "I defy you to think of any other executives in the world who would bring a team like that into their personal office for weeks on end."

So, a few years ago, Gore raised some concerns about "search quality," and then sat in Google's office for three hours watching ten "search-quality researchers and specialists in charge of this part of the business" work on solving problems he shared with the company's owners.

What were these concerns? Were they personally or politically motivated?

The article didn't say. Other than a mention early in the piece about his being a "longtime Google adviser," this was the only reference to Gore.

But, there were some other political points of note made by author Ken Auletta:

In some cases, Google's expansion has been hampered. The Federal Trade Commission held up the acquisition of DoubleClick in 2007, and the following year the Justice Department threatened anti-trust charges until Google agreed to relinquish its advertising agreement with Yahoo. Federal courts will decide the fate of Google's bid to digitize books, and in May Christine A. Varney, the new head of the Justice Department's antitrust division, announced that her department would more rigorously monitor large tech firms.

There is a common belief at Google that the Obama Administration and the Democratic leadership in Congress are more sympathetic to Silicon Valley companies and technology issues. Eric Schmidt is an economic adviser to Obama, and other Google executives, such as David Drummond, the chief legal officer and senior vice-president of corporate development, were early and fervent Obama supporters. But Democrats traditionally favor more regulation, not less, and Google has powerful rivals that command attention in Washington. Google also touches on issues-privacy, concentration of power, copyright-that tend to draw scrutiny.

Interesting, especially when one considers what analyst and consultant Scott Cleland wrote about Google's political interests in January 2007:

There is an increasing body of evidence that Google may be less concerned about promoting a free, open and "democratic" Internet, and more concerned with promoting a regulated Internet for the benefit of "Democrats."

Google has been steadily building up its lobbying prowess, establishing its Google NetPAC before the 2006 elections. And with 98 percent of the company's campaign donations going to Democrats in that cycle, according to the Center for Responsive Politics, Google surely will be looking for returns soon. [...]

Company founders Larry Page and Sergey Brin are also widely believed to have the ear of House Speaker Nancy Pelosi, D-Calif., whose district is not far from Google headquarters in the Silicon Valley. In particular, Davidson said, Google hopes that she will pursue her "Innovation Agenda" to provide more federal money for high-tech research and training.

Cleland followed up his original piece on this subject with this in August 2007:

How does this all relate to Gore giving Google search quality tips a few years ago? Who knows, but as NewsBusters has been reporting almost since its inception, Google has regularly demonstrated a liberal leaning as well as anti-conservative proclivities:

With this in mind, NewsBusters would be very interested in exactly what concerns Gore shared with Google a few years ago, and what the company's experts did in response.

If it turns out this is much ado about nothing, then we can all sleep better.

On the other hand, if his suggestions were either personally or politically motivated -- the personally part might have had something to do with his global warming activism or his schlockumentary "An Inconvenient Truth" for instance -- America has the right to know.

*****Update: Heartland's Paul Chesser reminds us about a video recently released by Google Earth starring -- who else -- Al Gore!