Sportswriter: Black NFLers Claiming They Won't Play for Rush 'Are Lying Through Their Teeth' 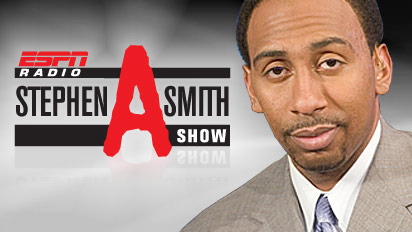 Sportswriter Stephen A. Smith says the black football players claiming they wouldn't play for a team that conservative talk radio show host Rush Limbaugh owned "are lying through their teeth. They're walking hypocrites."

This occurred Saturday on CNN's "Your Money."

Smith also claimed that what Limbaugh said about Philadelphia quarterback Donovan McNabb a few years ago shouldn't disqualify him from owning an NFL team (video embedded below the fold with partial transcript, h/t Story Balloon):

CHRISTINE ROMANS, HOST: Quickly, Rush Limbaugh may become part owner of the St. Louis Rams football team. It does not sit well with some black NFL players who claim if Limbaugh is the owner, they won't be playing in it. Should the NFL allow Limbaugh to purchase or invest?

STEPHEN A. SMITH, SPORTSWRITER: Absolutely. If he has the money, there's absolutely nothing wrong with it. And those black ball players that are saying that, I'm here on national television telling you they are lying through their stinking teeth. They're walking hypocrites.

SMITH: Oh, please. Their moral standard is greed. I'm an athlete and Rush Limbaugh happens to be the owner of the St. Louis Rams, so the New York Jets offer me $10 million, but Rush is offering me $20 million. I'm going to have a problem with it? Please, they are lying. They are wasting my time.

ROMANS: What about Donovan McNabb? Wasn't it the comment on ESPN...

SMITH: The media's desire is that a black quarterback do well. Yes, it caused a lot of controversy. I thought that Rush Limbaugh should have been criticized for that, which he was and unceremoniously fired by ESPN. But the reality is that that does not mean he should not own an NFL team. If he has the dollars, he should be allowed to do it. He's definitely an NFL fan. I've listened to him talk about football. It's not like he's ignorant to the game of football. The man knows football. He's a Pittsburgh Steelers fan. He wants to buy them.

ROMANS: And he's got money. Gary is a guy who his whole driving goal in life -- A, he loves his family, B, he wants to buy the New York Jets.

GARY VAYNERCHUK, WINE LIBRARY TV: Buy the New York Jets. So I'm jealous of Rush and more importantly, I agree with Stephen A. Smith, knocked it out of the park just now. The players don't give a rat's butt. I totally agree. They are going where the contract is. That's just the way -- and I don't blame them. These guys -- especially NFL players, they get beat up. Running backs are has beens of 28. They've go to go there.

SMITH: Christine, you've got a three year max, four years if you are lucky in the NFL. This is a very serious sport, a very violent sport.

ROMANS: Don't spend it over being mad at Rush Limbaugh.

SMITH: That's not what I'm saying. What I'm saying is oh, you're going to pass up money because oh, my god, I'm offended by Rush Limbaugh being the owner? Who are you fooling? Liars. I wish they would say it publicly. Show me who it was.

ROMANS: They would never do that.

ROMANS: Stephen A. Smith, thank you so much. Author Gary Vaynerchuk, very nice to see you again, Gary.