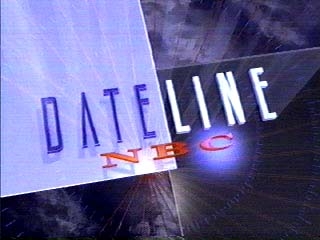 A group called Americans for Limited Government on Thursday accused a producer for NBC's "Dateline" of sending them an anti-Semitic e-mail message in response to the organization's request for Congress to defund the controversial group ACORN.

The mass e-mail in question, sent by ALG's Alex Rosenwald to many members of the media including NBC's Jane Stone, said:

“The only way Congress can unravel all of the various funding measures in the ‘stimulus,’ in the ‘Foreclosure Prevention Act,’ and other measures is to pass the ‘Defund ACORN Act’ immediately. They should do it now. Before ACORN spends it all.” -- ALG President Bill Wilson

According to ALG, Stone responded:

The Capital Research Center's Matthew Vadum, who is also a contributor to NewsBusters, posted a screen-cap of the e-mail message at Andrew Breitbart's website Big Government.

NBC News president Steve Capus fired back at Americans for Limited Government Friday, after the conservative group published an email allegedly from NBC producer Jane Stone to its director of media outreach Alex Rosenwald, with one line: “Bite me Jew Boy.”

“I’m still in shock, and outraged that this reckless organization would go out with such a defamatory, irresponsible statement,” Capus told POLITICO. “We have done a complete email analysis, all of our IT, all of our records.”

Here's what both sides agree on: Stone responded yesterday to a mass email from ALG.

But Stone’s response email—provided to POLITICO—did not have any anti-Semitic comment. In fact, it had just one line: “Take me off this list!” (There are also subtle differences, including number of dashes, between the two emails).

“Somebody, on the other end, I’m assuming, took the return stamp from the email and then put in this hateful message,” Capus said. “I don’t know who did it. It’s outrageous to suspect that somebody from NBC News would do it.”

For its part, ALG responded:

We at Americans for Limited Government are saddened that instead of helping us to get to the bottom of the hateful email that was indeed sent from NBC’s server, and this can be verified, and was not tampered with, which can also be verified, that NBC President Steve Capus has instead chosen to circle the wagons and protect what is indefensible with hysterical, frantic accusations.

This email has left a digital footprint that is undeniable. We did our due diligence. We have confirmed that it indeed came from NBC’s server and Jane Stone's email address.

As before, we renew our offer that we made to both Ms. Stone and NBC President Capus over the phone today to get to the bottom of who sent this email from Ms. Stone’s Blackberry email address. That offer remains open, and we would like it very much if both Ms. Stone and NBC would issue an apology to both Americans for Limited Government, and Mr. Alex Rosenwald, who was the target of this hateful email.

Where does this go from here?

Update 09-26 7:25 | Matthew Sheffield. ALG can help prove their case further if they release the email in its entirety including the "header" information which tells from what exact computers the message was sent. I've put in an email to ALG asking for the headers and will keep everyone posted.