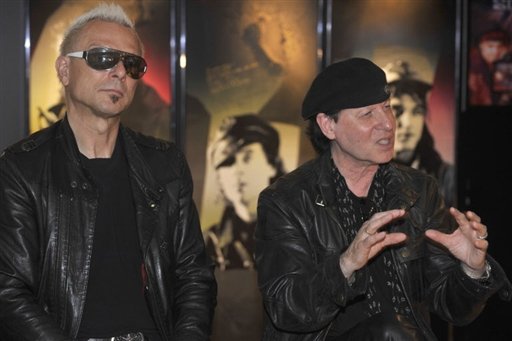 All together now: "I'd like to teach the world to stop global warming."

Though such likely won't be the lyrics, a group of the world's leading celebrities have joined together to create a new song to draw attention to climate change.

After all, with an Oscar-winning film, a Nobel Peace Prize, and all the focus on Al Gore's now completely debunked schlockumentary "An Inconvenient Truth," there certainly hasn't been enough attention given to what is indeed becoming one of the biggest scams in history.

Despite all that, folks who regularly fly around the world emitting more carbon dioxide in a year than most people on the planet will all of their lives feel the need to scold those barely making ends meet.

British rock group Duran Duran and heavy metal band Scorpions are among 55 world celebrities who have joined in recording a song to draw attention to the global warming crisis, organisers said on Monday.

The song is part of a mass media campaign on the threats of climate change organised by the Geneva-based Global Humanitarian Forum, headed by former UN secretary general Kofi Annan.

The song entitled "Beds'r Burning", which was originally recorded by the Australian group Midnight Oil in the 1980s, can be downloaded from the Internet for free and will be presented to the public at a launch in Paris on October 1. [...]

The media campaign featuring the song is aimed at putting pressure on world leaders to reach an agreement on tackling climate change at a UN-sponsored conference in Copenhagen in December.

All together now: "I'd like to give the world a hoax that's full of greenhouse gas."