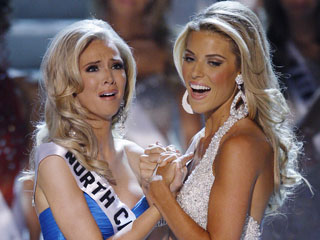 Carrie Prejean, the former Miss USA runnerup, has filed a lawsuit against the Miss California Organization claiming it discriminated against her religious beliefs thereby causing her emotional distress as well as financial loss.

According to FoxNews.com, Prejean "filed a complaint Monday morning in Los Angeles Superior Court against K2 Productions (the franchise that operates the Miss California Organization) as well as co-executive directors Keith Lewis and Shanna Moakler and publicist Roger Neal."

"If Carrie had not answered the question in support of traditional marriage ... she would most certainly still be Miss California,” Prejean’s attorney Charles S Limandri told Foxnews.com. “Over the past two months we have worked hard to provide overwhelming evidence that Carrie Prejean did not violate her contract with Miss California USA and did not deserve to have her title revoked by Keith Lewis. We will make the case that her title was taken from her solely because of her support of traditional marriage. She did not want to sue, but people need to know the truth.”

The suit alleges that Lewis’ assistant emailed Prejean before the Miss USA pageant with instructions not to reference God in her Miss USA applications. The suit also alleges that after her controversial answer at the national pageant in April, Lewis told Prejean's mother that her daughter was not to attend the after-party (despite being first runner-up) as “too many people were angry with her.”

According to the suit, Prejean believes Lewis, Moakler and Neal joined gossip blogger Perez Hilton to create a “conspiracy to attack” that has caused her to suffer “emotional distress, anxiety, depression and loss of sleep.” As a consequence, the suit alleges, Prejean has been subject to “public ridicule, scorn and humiliation, lost earnings,” and has had to spend a great deal of money with stress-related medical expenses.

It will be fascinating to see how the Prejean-hating media report this in the coming days.