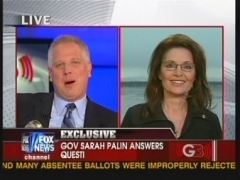 Former Alaska Gov. Sarah Palin issued an invitation that should please Fox News's Glenn Beck as well as his fans.

Of course, it won't make Obama lovers and Palin haters in the media very happy.

FOX News' Glenn Beck is doing an extraordinary job this week walking America behind the scenes of 1600 Pennsylvania Avenue and outlining who is actually running the White House.

Monday night he asked us to invite one friend to watch; tonight I invite all my friends to watch.

So far, 8,603 of Palin's supporters have voiced their approval of her request, while another 1,863 have left comments. More have posted their opinion at her fan wall.

It should be very interesting to not only see what kind of viewership Beck gets this evening, but also how both his and her detractors in the Obama-loving media will respond.

*****Update: According to FoxNews.com, Rush Limbaugh will be Beck's guest this evening to discuss whether or not Obama's FCC is planning to muzzle conservative talk radio.