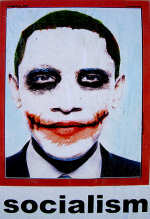 Since NewsBusters and the Drudge Report first introduced America to the Obama Joker poster -- with help from talk radio host Tammy Bruce, of course -- most media outlets have speculated the artist was likely white, conservative, and racist.

As reported by the Los Angeles Times moments ago, the up-until-now anonymous creator of the poster sweeping the nation is a 20-year-old college student of Palestinian descent with largely liberal political leanings.

Honestly, you can't make this stuff up:

Bored during his winter school break, Firas Alkhateeb, a senior history major at the University of Illinois, crafted the picture of Obama with the recognizable clown makeup using Adobe's Photoshop software.

Alkhateeb had been tinkering with the program to improve the looks of photos he had taken on his clunky Kodak camera. The Joker project was his grandest undertaking yet. Using a tutorial he'd found online about how to "Jokerize" portraits, he downloaded the October 23 Time Magazine cover of Obama and began digitally painting over it.

Four or five hours later, he happily had his product. [...]

"After Obama was elected, you had all of these people who basically saw him as the second coming of Christ," Alkhateeb said. "From my perspective, there wasn't much substance to him."

"I abstained from voting in November," he wrote in an e-mail. "Living in Illinois, my vote means close to nothing as there was no chance Obama would not win the state." If he had to choose a politician to support, Alkhateeb said, it would be Ohio Democratic Rep. Dennis Kucinich.

How delicious: Kucinich, likely the most liberal of presidential candidates last year!

Although Alkhateeb claims he was making no political statement with the artwork, he's plugged into the Washington debate. Though born in the United States, his Palestinian family closely follows Middle Eastern politics.

"I think he's definitely doing better than Bush was," Alkhateeb said of Obama. Alkhateeb's views on foreign relations align with the Democrats, he said, while he prefers Republican ideals on domestic issues.

Alkhateeb's assessment of Obama: "In terms of domestic policy, I don't think he's really doing much good for the country right now," he said. "We don't have to 'hero worship' the guy." [...]

Regardless, Alkhateeb does agree with the Obama "Hope" artist about "socialism" being the wrong caption for the Joker image. "It really doesn't make any sense to me at all," he said. "To accuse him of being a socialist is really ... immature. First of all, who said being a socialist is evil?"

Now that Alkhateeb has been unmasked, it's going to be fascinating to see how media outlets besides the LA Times report his Middle Eastern background as well as his political leaning.