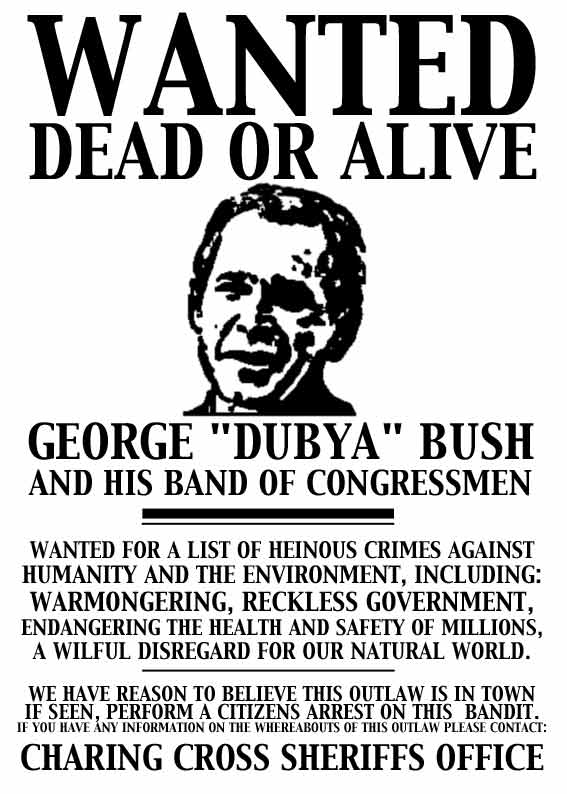 UPDATE: video added at end of post with footage of the Portland protest.

As Obama-loving media continue their assault on town hall meeting protesters, they seem to have forgotten how they covered civil disobedience when George W. Bush was in the White House.

As Fox News's Bill Sammon pointed out Wednesday, when former President Bush was greeted by hostile protesters on a fund raising trip to Portland, Oregon, in August 2002, the news media didn't bother sharing with the public some of the truly incendiary signs in the crowd or the vulgar behavior of the attendees.

In fact, some of the television reports at the time painted the protesters as innocent victims of an overly aggressive police force.

Before we get there, here's Sammon's take (h/t NB reader ShruggedAtlas and Michelle Malkin):

When Bush visited Portland, Ore., for a fundraiser, protesters stalked his motorcade, assailed his limousine and stoned a car containing his advisers. Chanting "Bush is a terrorist!", the demonstrators bullied passers-by, including gay softball players and a wheelchair-bound grandfather with multiple sclerosis.

One protester even brandished a sign that seemed to advocate Bush's assassination. The man held a large photo of Bush that had been doctored to show a gun barrel pressed against his temple.

"BUSH: WANTED, DEAD OR ALIVE," read the placard, which had an X over the word "ALIVE."

Another poster showed Bush's face with the words: "F--- YOU, MOTHERF---ER!"

A third sign urged motorists to "HONK IF YOU HATE BUSH." A fourth declared: "CHRISTIAN FASCISM," with a swastika in place of the letter S in each word.

Although reporters from numerous national news organizations were traveling with Bush and witnessed the protest, none reported that protesters were shrieking at Republican donors epithets like "Slut!" "Whore!" and "Fascists!" [...]

All the while, angry demonstrators brandished signs with incendiary rhetoric, such as "9/11 - YOU LET IT HAPPEN, SHRUB," and "BUSH: BASTARD CHILD OF THE SUPREME COURT." One sign read: "IMPEACH THE COURT-APPOINTED JUNTA AND THE FASCIST, EGOMANIACAL, BLOOD-SWILLING BEAST!"

How was this reported then?

Yet none of these signs were cited in the national media's coverage of the event.

Sammon's quite right. In fact, some of the television news reports sympathized with the protesters.

Here's how Aaron Brown covered the event on the August 22 installment of CNN Newsnight:

AARON BROWN, HOST: That said, the president has taken his share of knocks on the environment, fair or not is for others to say. But the criticism boils down to this: Whether it's Alaska and oil or Oregon and timber, the solution offered by the administration, say the critics, always seems to benefit big business. Again, fair or not, it is part of the national political landscape.

And for more on things political in the president's journey out West, we're joined by CNN senior White House correspondent John King -- John out in Portland.

Just before we get into the politics of trees and timber, tell me about the protest the president encountered tonight.

KING: Some protests earlier today up near Medford, Oregon where there president was. More protests here in Portland today. About a -- more than 100 tried to walk up on the president's hotel. Police here in Portland used pepper spray to keep them away. There was some feisty altercation between the police and the protesters. After the police asked the protesters to leave the area around the president's hotel, as I said, some pepper spray used there. It is a calm situation now.

Not unusual for the president to encounter protesters, especially when his focus is on environmental issues.

Interesting by comparison to how town hall protesters are viewed today, correct? King made a similar defense of the protesters' activities on that evening's Moneyline:

KING: Several major environmental groups take issue with the Bush plan, and some protesters in Portland today suggesting the president was taking advantage of this year's wildfire crisis to try to help friends in the timber and logging industry.

Once again, protesters in the right, and absolutely NO reference to their hostile signs or behavior.

NBC's "Today" show the following morning also didn't seem at all disturbed by the behavior of protesters the previous day:

Good morning. Not a warm welcome for President Bush. Protest in Portland turned violent as police confront demonstrators with batons and pepper spray outside the president's hotel. The streets are calm this morning as the president moves on to California today, Friday, August 23rd, 2002.

Announcer: From NBC News, this is TODAY with Katie Couric and Matt Lauer, live from Studio 1A in Rockefeller Plaza.

And I'm Campbell Brown. Katie's off. The demonstrators were protesting against fres--President Bush's foreign policy and also his new forest initiative.

LAUER: That's right. About 500 protesters in all. There were five arrests.

No mention of disgusting signs or vulgarity thrown at the President.

This is how NPR covered it that same morning:

President Bush campaigns for Republican candidates today in California after spending the night in Portland, Oregon. Hundreds of protesters demonstrated outside his hotel where he appeared at a fund-raiser for Republican Senator Gordon Smith. Earlier yesterday, the president used the nation's largest wildfire in southern Oregon as a backdrop to introduce his plan for improving the health of the public forest. He proposed easing environmental regulations so that timber companies could thin out decade's worth of the combustible material. NPR's Robert Smith was with the president in Medford, Oregon.

The residents of southern Oregon who came out to see the president unveil his plan are clearly fed up with living next to wildfires. People here say they are sick of the road closures, the threatened evacuations and the five weeks of brown haze that has filled the valleys.

Once again, the take is to present the side of the protesters as logical while completely avoiding how violent things got the previous evening and not mentioning the disgusting signs or hostility.

Quite different from today's reporting of what's going on at town hall meetings, correct?

MSNBC's Phil Donahue took it even further in an interview with one of the protesters who blamed the police for overreacting:

Joining us now from Portland is Chris Preucil, one of the protesters and founder of the Alliance for Sustainable Jobs and the Environment. You are Well, Ms. Preucil, you are here to say, among other things, that you think that the police really didn't have to be this aggressive. Do I understand your position?

CHRIS PREUCIL, PROTESTING THE PRESIDENT: Oh, not at all. And the police in Portland, Oregon, have had years of history of completely overreacting to peaceful protests.

DONAHUE: You were there, and you're saying that nobody intended any violence at all, that you wanted to convey your displeasure to the president near his hotel. And then do I understand you to say that the police -- the police had you isolated, did they not?

PREUCIL: The president of the United States is not doing very well, as far as being accountable to the people, so there was essentially "no protest" zone, so Bush couldn't actually see the people who were protesting his administration. And the police insisted on pushing that "no protest" zone back, making it bigger and bigger, without really warning the crowd. And instead of announcing to the crowd to move back in a way that was audible, just unleashing pepper spray onto, you know, 12 people or more at a time. It was very inappropriate.

But President Bush's motorcade, we do believe, did get to see some of the protesters, but the message did not get through as clearly as it should because he isolated himself from the people.

DONAHUE: You make the point that you think that the elite, wealthy among us are being protected from people who disagree with them by the cops.

PREUCIL: Well, by the people that are oppressed by a system that allows an elite class to live in luxury while the poor, the working poor and the working class all stress about things like the recession and the amount of debt they're in and how they're going to feed their children and put them through school. And this is nothing new. You know, the elite class has tried to shield themselves from the lower classes and the working classes for thousands of years now.

And Mike Barnicle made the following statement that Friday evening while subbing for Chris Matthews on MSNBC's "Hardball":

Good old-fashioned political rioting is back in style in the Pacific Northwest. Check out these anti-war activists protesting President Bush in Portland. Nice to see that the president is being protected by low tech pepper spray.

Imagine that: good old-fashioned political rioting. Not how today's town hall meeting protesters are being depicted, is it?

In the end, I could not identify one television media outlet that in any way accurately reported the real nature of the hostilities expressed towards President Bush in Portland, Oregon, on August 22, 2002.

I guess it's only fashionable to negatively depict protesters when they don't agree with a President you helped get elected.

*****Update: the following video includes footage of the Portland protest in question confirming some of the signs Sammon referred to (vulgarity alert)...