Janeane Garofalo Stands By Her Tea Partiers Are Racists Claim 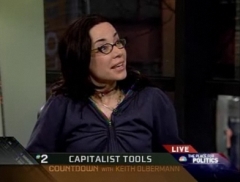 Comedienne and liberal activist Janeane Garofalo caused quite a stir last month when she called Tea Party goers "a bunch of teabagging rednecks," adding "this is about hating a black man in the White House. This is racism straight up."

On May 8, Fox News correspondent Griff Jenkins happened upon Garofalo at a Starbucks in Boston, and asked, "What do you think of calling just honest protesters racists?"

Garofalo wasn't backing down or apologizing: "Well, because they're not just honest protesters. They were indeed motivated a lot by racism."

What follows is a full transcript of Jenkins' appearance on Fox News's "Hannity" Monday wherein much of his interview with Garofalo was aired (video embedded below the fold, complete, unedited interview video at end of post):

SEAN HANNITY: And tonight in "Your America," now you may remember when the left wing liberal actress Janeane Garofalo had this to say regarding the attendees of the anti-tax tea parties.

GAROFALO: They don't know their history. This is about hating a black man in the White House. This is racism straight up.

HANNITY: Our own Griff Jenkins recently confronted Miss Garofalo just outside of Boston and asked her if she stood by those ridiculous insane comments. Let's take a look.

GAROFALO: Well, because they're not just honest protesters. They were indeed motivated a lot by racism. You saw some of those signs. Did you not? And if they are upset about fiscal imprudence, where were they for the last eight years?

JENKINS: But you don't know they're racist.

GAROFALO: I haven't had a good -- what about that one sign that said, "What you talking about, Willis?" What do you think about that sign?

JENKINS: I didn't see that sign, I was just asking you.

JENKINS: What do you say to the people that say, all right, you owe those people an apology?

GAROFALO: I don't. So they're going to have to wait a long time. So I'd say I don't.

JENKINS: And what about to the people who say that NBC should not let -- you know, your comments go unchallenged?

GAROFALO: How do they go unchallenged? They're being challenged all the time? And why -- I would say, why do they not challenge anything that FOX says?

I don't want to talk to you about this because you're obviously trying to provoke something here. If you don't want admit the truth about the racist element to those people that were there then I would say that you are in deep denial.

JENKINS: That's not what you said. You said everybody involved was a racist.

JENKINS: You hate conservatives. That's the bigotry that you condemn.

GAROFALO: There is not tenets of the conservative movement -- why are you even here? What do you guys -- I'm going to get (INAUDIBLE) but you guys are ridiculous.

JENKINS: Yes, that's what we are. You saying what the movement was about.

GAROFALO: Where are you guys running? What's your thing? Yeah, it was racist.

JENKINS: How so then? That's all I'm.

GAROFALO: Because if it's about fiscal imprudence why were they not protesting for the last eight years under the Bush spending? Where were they? Why did they have no problem with that?

JENKINS: Again. No need to apologize?

GAROFALO: No. No. I'm not talking about this anymore. I stand by my words. I will not apologize.

JENKINS: Everybody at a tea party are racists?

GAROFALO: Yes. Everybody I saw at that tea party are racists.

GAROFALO: It is amazing, isn't it. How dare I?

HANNITY: There you have it. Griff Jenkins joins me now.

Griff, boy, this one angry liberal if I've ever seen one. Walk us through how this all happened.

JENKINS: All right. Well, let me tell you, Sean. Look, I was the reporter in Washington, D.C. on April 15th. I stood for 12 hours in the pouring rain and covered those protesters. They were honest American protesters protesting the billions spent, the bailout, the trillions and the budget deficit, and I didn't see any pointy white hats, I didn't see any racist signs.

And so I've been interested in this story because no one has challenged Miss Garofalo on her comments, this gross generalization that everyone was a racist. I didn't see one racist in my tea party, but perhaps there were some elsewhere.

I wanted to ask her what's going on. I went to her comedy performance in Somerville, Massachusetts, Sean, to find out if she was going to talk about it. I was sitting outside on a lovely afternoon, having a latte outside a Starbucks, and she happened to come there and so I said, hey, I want to ask you a question. And she stood firmly, as you just saw, behind her statements.

JENKINS: And seemed bitter that I would ask her about it.

Now they're supposed to be a credible news organization. You would think that if they're going to make these accusations, I was in Atlanta. Over 20,000 people. I saw signs, "Lower our taxes." I didn't see one racist sign, one racist person, by anybody anywhere.

So, you know, what does that say about a news organization that would allow her to g o unchallenged?

JENKINS: Well, it certainly surprises me. I mean, look, the host just says oh OK, yes, they're all racist, about hating a black man, let's just move on. What? Are you kidding me? And then there no follow-up from any other representative from that network or another one.

So I think it was very legitimate to go and ask her about it. Now let me just tell you, I don't go on the air and call a woman bitter because I'm not sure that that's nice and that's not the way my mom and dad raised me. But I watched her more than 50 minutes comedy show which was about anti- religion, anti-marriage, anti-children.

She's mad about things. She's pessimistic. She has serious, in my opinion. She came out with her hair kind of cut and she said she was so nervous that tea party protesters were going to disrupt her comedy routine that she cut chunks out of her hair.

I don't understand it. It's like I wanted to just say be happy. Sean, she started the show with this quote, "If there's any tea baggers here, welcome, and as always, white power."

It's unbelievable that she would do that.

HANNITY: I have some experience. I actually went over to a radio studio once and I tried to be on a radio show, have a civil discussion. I mean it seems that this is very characteristic of the left. She spent most of the time, in the breaks, you know, on the floor petting her dog and laying next to her dog.

I mean it's just bizarre. But I see this with Bill Maher, for example. Bill Maher has become an angry, bitter guy. You know we saw this in these comments that we're just discussing, you know, with Wanda Sykes over the weekend. We see this with Garofalo.

If Republicans or conservatives ever used the same type of humor or language there'll be calls immediately to have them removed from the air ways. So that's where the double standard lies, right?

JENKINS: Well, it certainly seems so to me. Why is she or any other liberal so mad? I mean, look, I'm fair and balanced.

JENKINS: To win the lottery?

HANNITY: I think that's probably it. Griff, thanks for everything. Appreciate it.

Well, pretty angry. By the way, Tom Brokaw, are you proud of your network?