Bill Maher: 'The Racism is Coming from Rush Limbaugh' 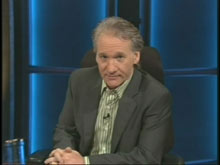 Did you know that the racism in our country is coming from Rush Limbaugh?

Not just that, but also the people who are buying guns and ammunition since Election Day are doing so "because they're afraid that Obama and his Negro army are going to come and get" them.

Such offenses occurred in the following exchange between Maher and his conservative guest Andrew Breitbart (video embedded below the fold, relevant section at 2:37):

ANDREW BREITBART: Right now if you look online you'll see that "Atlas Shrugged" and Ayn Rand's books are, are, you know, flying off of the bookshelves, of the virtual bookshelves...

MAHER: Oklahoma's out of ammo because they're afraid that Obama and his Negro army are going to come and get you.

BREITBART: Who's afraid of, who's, where's this racism coming from? I haven't seen this online.

MAHER: Well, the racism is coming from Rush Limbaugh. It's taking root in Oklahoma.

Imagine that. But there's more, for when Breitbart took offense Maher laughed.

Even better, after Maher's other guest, Georgetown professor and liberal talk radio host Michael Eric Dyson, elaborated on why Limbaugh is a racist, Breitbart pointed out that nobody was a bigger defender of Supreme Court justice Clarence Thomas than Limbaugh.

This elicited uproarious laughter from Maher and his audience.

Breitbart then deliciously acknowledged the crowd's response: "Thank you MoveOn.org, I appreciate that."

Maher disgustingly replied: "Clarence Thomas, a, a black man who does not represent 95 percent of black people."

That's bulls**t...You're allowed to have independent thought in this country. And this kind of intimidation by the black studies intelligentsia crowd that, that intimidates black people who are conservatives...

Maher then asked an amazingly stupid question: "You think black people are intimidated from being conservative?"

Ummm, Bill, you just intimidated black people from being conservative by laughing when Clarence Thomas's name was brought up and insulting him with your claim that he doesn't represent 95 percent of black people.