Will Media Bash Obama For Trying To Enter Oval Office Via Window?

On Tuesday, President Barack Obama attempted to enter the Oval Office via a panel of windows he mistook for a door.

Will media ridicule him for this innocent mistake much as they did George W. Bush when he tried exiting a meeting with reporters in Beijing back in November 2005?

It looks like President Obama hasn't gotten acquainted to his White House surroundings. On the way back to the Oval Office Tuesday, the President approached a paned window, instead of the actual door -- located a few feet to his right. [...]

Obama, who was returning from meeting with Congressional leaders, may have been distracted by Republicans' icy reception to his $825 billion stimulus package, which is poised to pass on Wednesday even without a groundswell of Republican support.

As the News pointed out, "there was little note taken of Obama's rookie mistake." 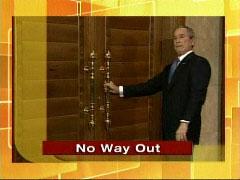 By contrast, when Bush tried leaving a press conference through locked doors in a building he had no familiarity with back on November 20, 2005, the press had a field day using the story and picture as evidence of his stupidity.

At the time, many used this incident as a metaphor for Bush not having an exit plan from Iraq. One such was ABC's "Good Morning America" as NewsBusters reported November 21:

This morning’s Good Morning America found symbolism in President Bush’s encounter with a locked door when attempting to leave a press conference. In the opening tease at 7:00 AM, Charlie Gibson said, "No way out. President Bush tries the wrong door on his trip to Asia and has fun for the cameras. But the big question now: Does he have an exit strategy for Iraq?"

Think Obama-loving media members will use his faux pas as a metaphor for anything negative currently happening in America or anywhere in the world?