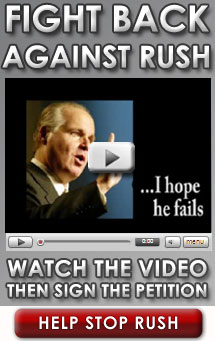 If you had any questions remaining about the war liberals have launched to end conservative talk radio they should be answered by a petition the Democratic Congressional Campaign Committee began "to show Rush Limbaugh and all of the Republicans what they're up against if they start attacking President Obama."

On Monday, the MRC's Brent Bozell warned Americans that Obama's statement to Republican Congressional leaders last Friday advising them to stop listening to Limbaugh was "just an opening salvo from the new administration in the war to stifle conservative talk radio and could soon be followed by a concerted effort to resurrect the so-called Fairness Doctrine."

Bozell was clearly prescient, for hours later the DCCC posted the following at its website (h/t NBer Blazer):

Last week, Rush Limbaugh gave us a preview of the outrageous Republican attacks that are on the way against President Obama and every Democrat working for change. Rush actually said that he 'hopes' President Obama fails to meet America's challenges.

Listen to Rush in his own words, saying "I hope he fails."

Limbaugh's cheap shot at President Obama might be the first by the Republican attack machine this year but we know that it won't be the last.

We need every grassroots Democrat to show Rush Limbaugh and all of the Republicans what they're up against if they start attacking President Obama and Democrats who are working to end the failed GOP policies of the last eight years.

Tell Rush what you think of his attacks on President Obama. We'll send him your comments.

Jobs, health care, our place in the world - the stakes for our nation are high and every American needs President Obama to succeed. Creating real change requires every American stand strong against Rush Limbaugh's attacks - and all of the other partisan attacks from desperate Republicans that are on the way.

Stand strong against Rush Limbaugh’s Attacks — sign our petition, telling Rush what you think of his attacks on President Obama. We’ll send Limbaugh your comments.

The war for freedom of speech has officially begun, America.

Be afraid! Be very afraid!

"I am greatly puzzled. Why would the Democrats petition against me if I am doing such terrible damage to the GOP? Click here to send messages of love, hope and change TO ME via this petition!"