David Gregory to Replace Russert as 'Meet the Press' Host 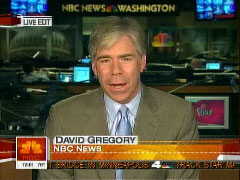 After months of mystery, as well as less than stellar performances from interim host Tom Brokaw, David Gregory appears to have emerged the winner in the "Meet the Press" sweepstakes.

I guess anything would be better than Andrea Mitchell, right?

The plan to anoint Gregory is not final but will be as soon as today, the executives said. NBC spokespeople refused to comment, saying the network would make the announcement.

The decision was made by Jeff Zucker, president and chief executive officer of NBC Universal, and Steve Capus, president of NBC News.

As NBC’s chief White House correspondent, Gregory has been a dogged – occasionally prickly – questioner of both the president and his press secretaries. The perceived tension benefited both sides, and Gregory maintained productive relations with senior officials.

Former White House press secretary Ari Fleischer said Gregory would be "an excellent choice": "No one was a tougher, more aggressive questioner in the briefing room than David Gregory. But when it came time to go on the air, he was always nothing but fair."

As a big fan of Tim Russert's, Sundays haven't been the same since his untimely death. Frankly, I think Brokaw has done a lousy job in Russert's absence.

With that in mind, I sincerely wish Gregory the best, and hope he can bring back a modicum of impartiality to this Sunday staple, as well as some class.