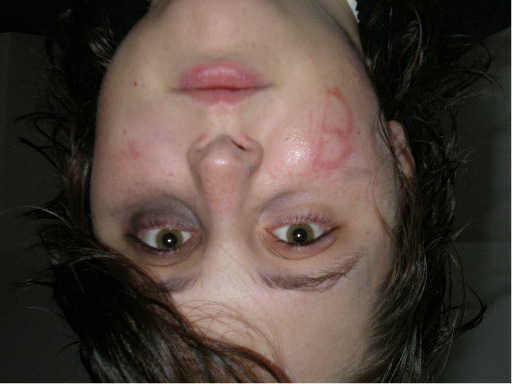 UPDATE AT END OF POST: Todd admits to making this all up.

Not surprisingly, some skepticism is being expressed concerning Ashley Todd's assertion that she was mugged by an Obama supporter who cut a "B" into her face Wednesday night when he discovered that the Republican volunteer had a McCain-Palin bumper sticker on her car.

Most prominently, the Associated Press seemed less than convinced with the veracity of the gruesome story NewsBusters shared with readers Thursday about a McCain campaign worker's fateful encounter with a mugger at an ATM in a Pittsburgh, Pennsylvania, suburb.

The AP made its skepticism clear with the headline, "McCain Volunteer Claims Attacker Cut 'B' Into Face," (photo courtesy Ace):

A campaign volunteer for John McCain told police she was robbed at knifepoint at an ATM and knocked down by a man who then carved a "B" in her face after noticing a sticker for the presidential candidate on her car.

Police said the woman, 20-year-old Ashley Todd of College Station, Texas, refused medical attention. An officer saw the injury, but the police report did not describe its size or severity, a police spokeswoman said.

Readers should note that nowhere in the AP piece were the following details reported by the websites of the ABC and CBS television affiliates in Pittsburgh (WTAE and KDKA respectively):

One has to wonder why the AP chose not to report these details.

Moving forward, the AP isn't the only outlet showing skepticism concerning Todd's story. The following was reported by TMZ Thursday:

Pittsburgh law enforcement sources tell TMZ they have serious questions about the authenticity of the alleged victim who says she had her face cut by a politically-motivated attacker.

She refused medical treatment after reporting the incident to police. Why on earth would she do that?

Some are finding the backwards "B" on her face suspect. Our friend Ace offered a few possible explanations:

For one thing, the image could be flipped.

For another thing, she could have taken a picture of herself in a mirror.

For a third -- if she were on her back, her head held by the attacker's left arm below her chin, her head between his legs as he scratched -- she'd be upside down as oriented to him.

In the end, this mystery is very easily solved. As most of you know, I was a bank manager for two different financial institutions in the early '90s. Both of them -- and likely almost all in our nation -- had cameras taking pictures from their ATMs as part of their security systems.

I'd be quite surprised to find out that the bank branch Todd was at didn't have such a camera inside its ATM. As such, it should be very easy to confirm whether what she claims did or did not happen.

That said, the little skepticism media are throwing at this story does indeed make it less likely that it will get much attention if Todd's assertions are validated. After all, by then, this will be old news.

Isn't skepticism a great thing? Think media outlets would be this skeptical if Todd was a black Obama volunteer and her alleged assailant was a white McCain supporter?

*****Update: Todd has now admitted to making this all up:

Police sources tell KDKA that a campaign worker has now confessed to making up a story that a mugger attacked her and cut the letter "B" in her face after seeing her McCain bumper sticker. [...]

This afternoon, a Pittsburgh police commander told KDKA Investigator Marty Griffin that Todd confessed to making up the story.

The commander added that Todd will face charges; but police have not commented on what those charges will be.