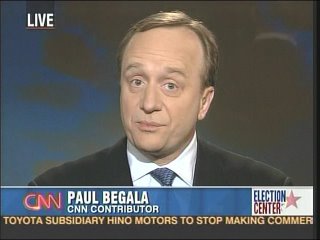 After a brief hiatus from CNN due to his ties to Hillary Clinton, former Clinton administration advisor Paul Begala is back on the cable network echoing Democrat talking points.

This comes months after CNN announced back in January that Begala, along with Hillary shill James Carville, had been removed as contributors "to make sure that all the analysts that are on are non-aligned."

If that's the case, how does CNN justify bringing Begala back just in time to echo Barack Obama's view that John McCain represents four more years of George W. Bush?

WOLF BLITZER, HOST: All right. Let's talk about the new book, "Third Term," which you clearly have a point of view. You believe that if John McCain is elected president, he would effectively be a third Bush term.

You're among the 50 percent who think it would be the same as Bush. But they've had their problems over the years, Bush and McCain, as you know.

PAUL BEGALA: They have. And I actually did a little reporting. I'm not a real reporter like you, but I talked to some people who were involved in the rapprochement between McCain and Bush.

And many of them told me -- and I quote them in the book -- one of the reasons they fought so bitterly is because they're so very alike. I do think they share the very same policy goals just like Bill Clinton and Barack Obama do.

They had their spat when they ran against each other, but, you know, seven and a half years McCain has been there 91 percent of the time for Bush. That other nine percent he's already flip-flopped on. Right? Most importantly, the Bush economic plan which McCain voted against but now says he wants to make permanent.

So there's just -- this is not, by the way, a personal attack. It's not even an attack in the sense that if you like Bush, you'll love McCain. But if you're looking for change, you're just not going to get it out of McCain. I think the record bears that out.

Sound almost exactly like what Obama is saying on the stump? But there's more:

BLITZER: The whole notion though that he was very critical of Rumsfeld, even Cheney in terms of the conduct of the war in Iraq, and effectively, at least White House officials -- you heard Ari Fleischer say it last night on "LARRY KING LIVE" -- the White House aides saw McCain as a real thorn in the side of the president.

BEGALA: Yes. You know, a lot of that is myth.

And I cite it in the book, and there are over 800 footnotes, so people can go look it up for themselves. And I had a dozen researchers work on this. So it's not just my opinions. It's the reality.

Again and again, when you go back to the real clips -- and we can do this -- John McCain said that Rumsfeld was doing a good job, that he was a good man. McCain refused to call for Rumsfeld's resignation even though most Democrats and even many Republicans were doing it. So the myth that somehow McCain was a thorn in Bush's side is just not true. He was actually Bush on steroids where the war was concerned.

BLITZER: Why do you think so many Americans see McCain very differently than they see Bush? Because if they saw it like you did, there would be no contest this time, given President Bush's unpopularity and also the fact that 80 percent of the American people think the country is moving in the wrong track right now, as opposed to the right track.

BEGALA: Well, I think the McCain persona has three elements -- one part very real, which is war hero, absolutely real. The more research you do, the more admiring you become of this man's service and suffering and sacrifice.

But the other two parts, maverick and reformer, are just myth. It's a well-cultivated, well-perpetuated myth, but it's a myth nonetheless. If you actually look at the issues, whether it's the economy, health care, taxes, trade, immigration, foreign policy, he's exactly the same as Bush. Now, again, if you liked Bush, if you're part of the 27 or 30 percent who liked Bush, you'll love McCain, but if you want change, you're just not going to get it from him.

BLITZER: The book is entitled "Third Term: Why George W. Bush Loves John McCain." The author, Paul Begala. Paul, thanks for joining us.

Honestly, the hypocrisy on display at CNN concerning this matter is astounding.

For the record, Begala was invited back to discuss his book on CNN Friday morning. How many more times is CNN going to allow this shill to bash McCain under the pretense of hyping his new book?