Lou Dobbs: 'My Colleagues in the Media Are Absolutely Biased'

An astonishing thing happened on CNN Sunday evening: Lou Dobbs told his guests, "My colleagues in the national media are absolutely biased, in the tank supporting the Obama candidacy while claiming the mantle of objectivity," and they agreed.

I kid you not. [audio clip available here]

LOU DOBBS, HOST: You know, it's really not working because the fact is we have a tied race here. You know, with all the national media, as I've been saying here for months, in the tanks. My colleagues in the national media are absolutely biased, in the tank supporting the Obama candidacy while claiming the mantle of objectivity. Whether they're in the front page of "The Washington Post," "The New York Times," whether it's any one of the news casts, I mean, it's ridiculous.

Now we have a situation where everything is tied up here, Diana. Is it possible, however, for Senator McCain to actually gain a significant lead here?

DIANA WEST, CNN CONTRIBUTOR: Well, I think it is possible. I mean, it's really, it's really hard to say exactly how these things are going, but this kind of superficial attack from the Obama campaign is not helping him at all. You have to remember that this particular attack came within 24 hours of another Obama ad that was trying to link McCain to Ralph Reed, to the convicted lobbyist Jack Abramoff. 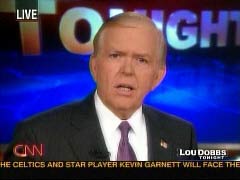 WEST: Exactly, and the McCain campaign came back with another huge response talking about if you want to play guilt by association, let's talk some more about former weatherman -

DOBBS: What happened to the post partisan lofty elevated discourse we're going to have, Miguel?

WEST: But who wants it?

PEREZ: Look, what the media has failed at here is putting pressure on Obama, especially, because McCain wanted to do those meetings together with Obama, those public forums.

PEREZ: Yes, and Obama has really evaded the issue and the media has not been after him for it. And I think that's disgraceful.

DOBBS: Well, I think the way the national media in this country right is performing, is disgraceful. And I mean, when we - "The Washington Post" had the courage to admit that it - Deborah Howell, the public editor, the ombudsman for the "Washington Post" ran a piece this past Sunday acknowledging that "The Washington Post" has put Barack Obama on the front pages of the Washington Post three times as many times as Senator McCain. "Time" magazine has run seven covers with Obama. McCain two. I mean, this is not close, folks. And it is ugly. It is nasty. And I guarantee you, we are watching a shift in the way in which the media in this country, which is already reviled by the public, I believe it's going to be even worse.

I'm an advocacy journalist. I'm an independent populist. When I speak, people know where I'm coming from. When these news organizations are doing this and trying to pretend cloaking themselves in the mantle of objectivity, you know, they're silly, (trulish), absolutely in my opinion, despicable phonies. They need to step out, they need to be objective or get their opinions out where it can be examined. We're going to be right back. Next, Hank Sheinkopf. He'll tell us about what he thinks of media bias. We'll be right back.

DOBBS: Well, we're back and I want to take a look at the "Time" magazine cover. Seven times, seven times in the past year, Barack Obama has been placed on the cover of "Time" magazine. Now, John McCain twice. Hank Sheinkopf, that is rather typical of the inundation of affection, the inundation of Barack Obama with the affection of the national media. What is your reaction as a democratic strategist?

HANK SHEINKOPF, DEMOCRATIC STRATEGIST: Good for democrats, not so good for the nation in the long term. Barack Obama is interesting, he's new, therefore he is news. OK. The fact that a black man can reach that pinnacle of success, raise the amount of money, run this kind of organization, beat Hillary Clinton is big news. At some point there has to be some fairness in the discussion. The problem here from the beginning is from day Obama showed up, I was wondering when the reporters will start chiseling his face on to Mt. Rushmore and the guy hadn't even won the nomination yet. That's the danger here, Lou. And people know it and they're not stupid. Average guy says wait a second, I want news and he isn't getting it.

PEREZ: Oh, look, in reaction to what both of you are saying, and what Hank just said about what's new. I went to journalism school. I teach journalism. You have to put aside what's new in terms of, when it comes to fairness. And when you're covering an election, you definitely have to be fair to both sides. And what's new is not a valid argument for the media. So you know, as a member of the media, I can tell you it's wrong to be doing that, you know, absolutely wrong.

DOBBS: I mean, I've said for some time, Diana West, that I believe, because I issue from time to time, like you, a few strong opinions. But as I say, everyone knows where I come from and I'm making no bones about what I'm doing. I'm an advocacy journalist. But I truly believe, Diana West, that every - I like you all to think about this, maybe every reporter on television, every editor, every reporter in the newspapers and magazines and on the web, there ought to be a little identification like we put on the lower third of the screen for an elected official, D or republican from Iowa or Des Moines or whatever, put that under there, we're journalist, declare yourself.

PEREZ: That's why newspapers have an opinion page.

PEREZ: It should be, opinions should be left to that page, not to the front page.

DOBBS: Right. Well, you and I know that. The editors of "The New York Times," "The Washington Post" and "The Los Angeles Times," it's a crying shame. "The Washington Times" as well, Diana West.

WEST: Well, you know, "The Washington Times" is - certainly has been covering news from a more conservative angle. But in terms of the -

DOBBS: I think that's a gentle way to put it. That's like saying "The New York Times" has a more liberal angle.

WEST: If you actually - No, no, no. I don't actually work for "The Washington Times" anymore.

DOBBS: I know that. But you should have an independent view.

WEST: I do. I have a very independent view.

DOBBS: Go get them.

WEST: I would say if you had a tally of that news room, you would find that it probably represents a conservative democratic split that's much closer to the national average than any other of the other news rooms you're talking about. That said, what we're seeing with the Obama - I think it will eventually ricochet on Obama. I think that people are getting very distressed and irritated about it. But the bias continues and, you know, it even came out with the coverage of these back and forth on gas this week in terms of the Ayers connection, because most of the papers was reading, "USA Today," "The Associated Press," they were not covering the challenge that the -

DOBBS: We got to wrap this up very quickly.