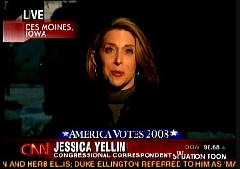 Now that the National Enquirer has been vindicated for revealing John Edwards' affair last October, liberals in the media are having to explain why they ignored this story for many months.

Some truly extraordinary hypocrisy was onstage for all to see Sunday when Howard Kurtz invited CNN's Jessica Yellin and Salon's Joan Walsh on "Reliable Sources" to discuss why the press boycotted the Edwards scandal as long as it did.

Two of the most absurd explanations: anonymous sources, and Edwards wasn't a top contender for the Democrat presidential nomination.

I kid you not:

HOWARD KURTZ, HOST: Now, CNN, Jessica Yellin, worked this story. In fact, had a package all ready to go, a taped piece with The Enquirer reporter who broke the story, was part of that. But CNN held back and just about all national media organizations held back.

Why do you think that was?

JESSICA YELLIN, CNN CONGRESSIONAL CORRESPONDENT: Well, there are two reasons. One is because of the evidence. You have to have your own solid sourcing to go with this.

Stop right there: when did it become suddenly important for today's reporters to have solid sources for a story? In the past several years, we've seen entire hit pieces about Republicans without one named source.

I guess if you're a liberal reporter, your journalistic standards have to be higher when accusing a Democrat of scandalous behavior. But I digress:

YELLIN: And the other is that John Edwards was at no point a top contender for the presidency. I mean, before the campaign started this got a little bit of traction. As soon as it was clear that he really wasn't going to be in the running after Iowa, there's no real public interest of need to know here.

KURTZ: Wait a minute. I'm not buying that. So what?

Exactly, especially since the Enquirer broke this story last October WELL before the Iowa caucuses. As such, claiming that you ignored this story because Edwards wasn't a top contender is either the height of ignorance, or the height of gall:

KURTZ: The guy ran for president two times. He was the Democrats' vice presidential nominee four years ago. And suddenly, because he didn't win the Iowa caucuses and drops out, you're saying it doesn't matter?

YELLIN: Howie, I guarantee you, if we were in hot pursuit of the story and pushing it and putting it on the airwaves at that time, we would have gotten lambasted for ignoring a war, ignoring a tanking economy, and all these issues that matters to voters. Why are we chasing some lascivious sex scandal?

Because THAT'S what folks in the media do. CNN did over 400 stories involving the Mark Foley scandal after it broke in 2006 and prior to the elections, and that was when things were going FAR WORSE in Iraq. Furthermore, Foley was likely a total unknown to most Americans before that scandal broke, as compared to Edwards who was John Kerry's running mate in 2004.

As such, why the double standard, Jessica?

YELLIN: The media would have gotten lambasted. [...]

WALSH: We are putting too much ideology into this. It really was for all the news organizations I know about a question of sourcing until the end of last week, when things started to fall into place. And also, you know, I would say the money issue, who paid her and why, is of huge -- huge might be an exaggeration in a time of war.

KURTZ: Well, it's significant. It's important.

AMY HOLMES, CNN: But it could be illegal.

WALSH: It's significant. It could be illegal, Amy.

So those things came into play, and suddenly people were really on it. But I agree with Jessica. Had people chased this with the kind of, you know, not good sourcing that we all had back, you know, in the snows of Iowa, we would have been -- I think we would have done a disservice. Once the sourcing was more solid, people went with it.

KURTZ: Let me bring Jessica back in.

If what you're saying is right, that, OK, there's somehow a different standard for a guy who's going nowhere, not running for president anymore, even if he was going to play a small role at the convention, then how do you justify the fact that this was all over every cable network on Friday night? Once Edwards says -- now it's newsworthy?

Wow. So, it's now a story because Edwards had the nerve to lie to the media.