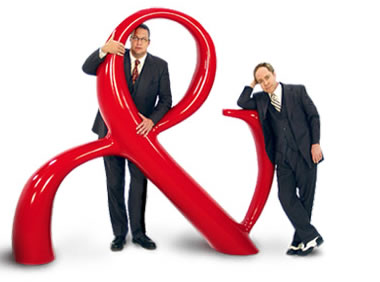 I bet you thought EPA stands for Environmental Protection Agency.

Not according to the comedy team Penn & Teller, who during Thursday's "Being Green" installment of their hit television series on Showtime, tore Nobel Laureate Al Gore apart while referring to him as an "Egregiously Pushy A**hole."

PENN JILLETTE: Three decades ago, pretty much everybody thought we had f***ed up the earth with careless and selfish fossil fuel emissions. We were heading into an Ice Age. Today, the same fossil fuel emissions are causing global warming. Hey, no worries. You may be a carbon sinner, but now you can buy yourself a clean, green conscience for cash. It's a new craze based on eco-guilt, and it's....bullshit!

Every day, TV, newspapers, and the Internet bombard us with a message that we're destroying the earth. Ice caps are melting, rivers are dying, polar bears are drowning, and trees are doing something. We f***ed up the environment beyond repair, and now we must pay the piper. It's no wonder so many people are suffering from green guilt. [...]

But if you want to do a show about the environment, you gotta start with that guy (Gore pictured on screen). It's an EPA thing. Not Environmental Protection Agency, Egregiously Pushy Asshole. You know who we're talking about.

Yes, we do. Watch the whole thing here. You won't be disappointed.

And, be sure NOT to miss the segment that COMPLETELY debunks the carbon credit scheme (about halfway in).