Profanity in the Liberal Blogosphere: Urinating on Presidents? 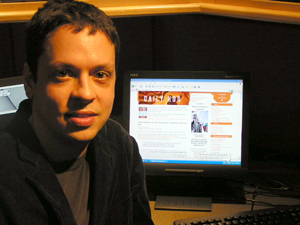 For years, NewsBusters has reported the unfortunate incidence of vulgarity and virulence in the liberal blogosphere, as well as how some prominent politicians and left-leaning media members have expressed concern regarding how such behavior negatively reflects on the Democrat Party.

On Friday, this invective hit a new low at Daily Kos when a piece that was quickly promoted to the highly-coveted "Recommended Diaries" list had an extraordinarily deplorable title -- which will NOT be printed here for what will be obvious reasons! -- dealing with relieving oneself on the likeness of former President Ronald Reagan.

This piece of detritus is so vile (h/t NBer lumpy) I won't dishonor the former president, or my readers for that matter, by linking to it; before curiosity sends you over there to see for yourself, be forewarned to do so with an empty stomach and the understanding that you will be revolted beyond your wildest imagination.

This raises an important question:

How can Newsweek continue its relationship with Daily Kos proprietor Markos Moulitsas if his website allows such commentary?

Now, before you question my understanding of the first amendment, rest assured that I am by no means suggesting the blogger that posted this piece has no right to express such opinions. Nor, am I stating that Moulitsas shouldn't be allowed to publish such vulgar vitriol.

Not the case. Go right ahead. In fact, I think it speaks volumes about what indeed is happening in the nether regions of the far-left that will continue to make it difficult for the Democrat Party to be mainstream as long as it caters to such.

Instead, the question is whether or not Newsweek wants to be affiliated with someone that would allow an article to be published at his website that not only deals with urinating on a "Reagan toilet bowl decoration," but also contains such imagery in the title.

This is especially true given the fact that Moultisas, in his own FAQ section, has guidelines about what can be posted at his website including inside titles (emphasis added):

When choosing a title, please avoid the following:

Is "piss" a curse word? One would think that when it's being directed onto a former president it is. Furthermore, let's understand that beyond just the title, Moulitsas makes it clear that "freedom of speech" does not give members the right to post anything they want:

But, what about Freedom of Speech?

Doesn't the First Amendment give me the right to talk about whatever I want here?

No. Daily Kos is owned by kos. The servers are his. He pays the bandwidth charges. He makes the rules; we are here as his guests. If he decides tomorrow that anyone not posting in iambic pentameter will be banned, your options are either to brush up on your poetry skills or find/start another forum.

DailyKos accepts that the 9/11 attacks were perpetrated by agents of Al-Qaeda. It is forbidden to write diaries that:

Authoring or recommending these diaries may result in banning from Daily Kos.

Interesting. So, Moulitsas has the right to ban posters at his discretion, and makes it clear that 9/11 Truther articles are forbidden.

Well, what about articles dealing with urinating on a picture of a former president, Mr. Moulitsas? Shouldn't that also be unacceptable to you?

Or how about referring to said former president as a "stumbling f**kwit?" Is that less offensive to Newsweek contributor Moultisas than 9/11 conspiracy posts?

Moving forward, what was really ironic about this piece was its intention to depict the Republican Party in total disarray:

When History is done with these people it's going to describe them as the ruin of a generation. My generation.

I guess this writer is proud of what's currently happening to the Democrat Party, especially with a civil war looming at the Convention in August, and incompetents like Nancy Pelosi, Harry Reid, and Howard Dean at the helm.

Makes you wonder what grade this DKos poster would give the 110th Congress, and what accomplishments he or she believes have been made since the Democrat victory in November 2006.

This seems especially important given the following ruminations about the past:

Maybe so. However, what have Speaker Pelosi and Majority Leader Reid done concerning such issues since DKos readers and writers assisted in ushering them to power in January 2007?

Sadly, in this "diarist's" zeal to be inflammatory -- did I mention that's prohibited in titles at DKos? -- the failures of the left since coming to power sixteen months ago are irrelevant.

On a more positive note, regardless of the current condition of the Republican Party, and its unfortunate movement to the middle in the past eight years, conservatives should at least be heartened by the notion the Democrats continue to curry the favor of the Netroots, for the further they move to the left, the less they represent the majority of Americans.