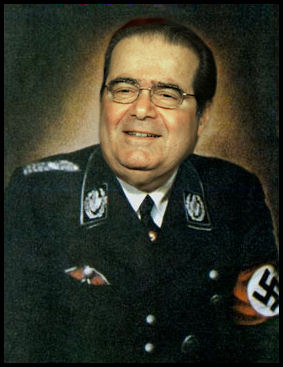 Does the hatred in the Netroots know no bounds?

In 2006, one of their leaders posted a picture of Sen. Joe Lieberman (D-Conn.) in black face.

On Tuesday, one of the "Recommended Diaries" at Daily Kos featured a picture of Supreme Court Justice Antonin Scalia in a Gestapo uniform (right) under the headline, "Today's Worst Person in the World" (h/t NBer Gat New York).

After some quotes from an Associated Press article about Scalia's views on "so-called torture," the DKos piece elaborated (with seemingly requisite vulgarity I might add while cautioning readers before they proceed):

I realized that this place gets a little touchy when it comes to Nazi portrayals and comparisons... if I jumped the shark, so be it, flame away, Godwin's Law be dammned. My late father, God rest his soul, went to war to put an end to this s**t. Those of you who read what I write here know that I very rarely if ever resort to profanity, but I say from the bottom of my heart and with every last breath of pride in my country, "F**k you, Antonin Scalia." I am not a government scholar, but surely there is something in place to censure or disbar your ass.

Can these people write anything without profanity?

Of course, this question is rhetorical, for even when vulgarity is absent from their prose, virtually everything that emanates from these folks is profane.

Those that can stand it should venture into the comments section to witness how such detritus is worshipped at this far-left website. Markos Moulitsas must be so proud of what he's created.