Global Warming Evangelism: Give Up Carbon For Lent! 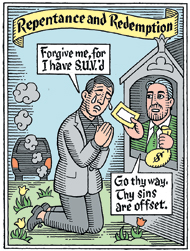 Consider that in Great Britain, several Bishops are asking their flock to give up carbon for the season of Lent which begins Wednesday.

As reported by the British Telegraph Tuesday (emphasis added throughout):

Lent is the time when Christians traditionally give up such things as sweets, chocolate or alcohol in recognition of the 40 days Christ spent fasting in the desert to prepare for his ministry.

This year they will be asked to think about their own carbon footprint and follow a few simple steps designed to help cut CO2 emissions. They include:

Those taking part in the Carbon Fast will be asked to remove one lightbulb from a prominent place in the home and live without it for 40 days. On the final days of the Fast they will be asked to replace it with a low-energy bulb which over its lifetime will save 60kg of carbon dioxide per year and up to £60.

Gotta love it. However, the hysteria got, well, more hysterical:

Sir John Houghton, former chief executive of the Met Office and the first chairman of the IPCC's scientific assessment, advises Tearfund on climate change. He said: "The scientific debate about the basic issue of climate change is over. Climate change is real. Evidence for it is to be seen in every corner of the globe.

"Tearfund have sounded an urgent warning that climate change is already hitting places like Bangladesh, Ethiopia and Niger hard. Climate change shows us that our energy-hungry lifestyles are harming our poorer neighbours across the world, now. The moral imperative for us to act is unquestionable and inescapable."

Yet, this goes counter to what we are seeing in developing nations such as China, India, and Brazil: as their carbon dioxide output increases, so do their standards of living.

It's estimated that in the UK each person is responsible for 9.5 tons of carbon dioxide per year; in Ethiopia the average is 0.067 tons and in Bangladesh 0.24.

As the standard of living in the UK is significantly higher than in Ethiopa and Bangladesh, and British carbon emissions per capita dwarf those of Ethiopians and Bangladeshis, it seems quite clear that as emissions increase, so do standards of living.

As such, if Britain's per capita carbon emissions decline -- even by an astounding 90 percent -- while Ethiopa and Bangladesh's remain the same, Ethiopians and Bangladeshis will still be living in deplorable conditions.

Such logic mysteriously eluded the author. Yet, that wasn't even the most hypocritical element to this issue, for if you investigate the Carbon Fast further, you find the following (emphasis added):

What a shock lay in store for me at the Carbon Gym, an online CO2 calculator. It asks you about your heating, water use and electrical gadgets as well as travel and food. My total annual emissions were a weighty 21.06 tons, nearly double the national average. I rang the Carbon Gym in a panic.

The biggest area you need to cut back on is air flights, said information officer, Joel Rawson. I adopted a hangdog expression and explained that they were all for work: ironically two were on climate change stories.

That means you can exclude them from your calculations, he said. This is just about your private journeys.

Ah. So, if all of my airplane travel is related to work, it doesn't count? I can travel the world, expelling as much carbon dioxide as I want, as long as it's part of my job?

Hmmm. So, let me get this straight: expelling too much carbon dioxide is a sin because it's harming poor people. BUT, it's okay if it's work-related?

No wonder Nobel Laureate Al Gore can fly wherever and whenever he wants with a carbon-free conscience.