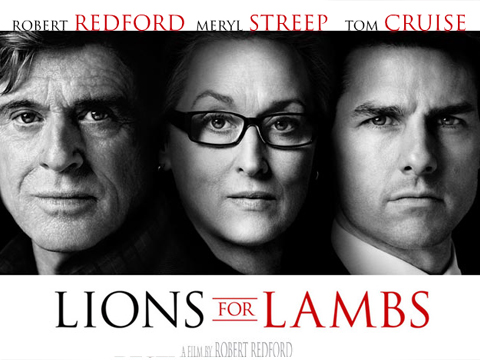 You would think this the perfect formula for a blockbuster movie: megastars Tom Cruise, Robert Redford, and Meryl Streep teaming up to flood theaters with an antiwar film just in time for the holidays.

Well, think again, for it appears that this much-anticipated film, featuring the much-anticipated return of Tom Cruise to the big screen, is a bigger bomb than anything the enemy has been able to lob at us in Iraq since the surge began.

After three weeks in theaters, the antiwar drama directed by Robert Redford with an A-list cast featuring Redford, Cruise and Meryl Streep, has grossed a meager $14 million in North American ticket sales and about $26 million more overseas.

Entertainment trade paper Daily Variety said the film was unlikely to gross more than $60 million in theatrical revenues worldwide and reported some industry watchers projecting the movie could lose as much as $25 million.

The news is even worse for those involved, as the film has plummeted to thirteenth place in terms of ticket sales this week.

As a final aside, antiwar films have fared very poorly this year. And, once again, family-oriented features topped the charts in 2007, as they have for several years now: only one R-rated film is in the top ten for the year.

Think Hollywood will ever realize that the baby boom kids are now parents?

I know. Silly question. After all, the Democrats haven't figured that out yet either.