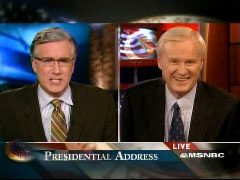 The idea that cable network MSNBC is liberally biased is certainly no stunning revelation. However, when one of its foremost liberal hosts, Keith Olbermann, admits it on the air, that is truly something to behold.

To set this up, Democrat presidential candidate John Edwards bought some advertising time on MSNBC Thursday evening to respond to President Bush's address to the nation concerning Iraq. After the ad finished, Olbermann disgracefully said the following:

Fascinating, wouldn't you agree? After all, here was a highly-paid newscaster asking an Air America radio host why a Democrat presidential candidate would bother spending money advertising on his network when everyone knows how biased it is.

Naturally, this isn't a surprise, coming from Olbermann. But are there any execs at MSNBC who are slightly upset that Olbermann just trashed their objectivity as a news network?

*****Update: Allah accurately points out, "Imagine Olby’s reaction to O’Reilly saying the same thing here about a Republican candidate. He’d have to do a special two-hour episode of Countdown just to allot himself enough time for all the invective." How true!