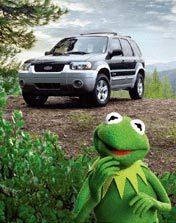 Chicago’s Mayor Richard Daley is finding out the hard way that it’s not so easy being green.

Mayor Richard Daley vowed six years ago to make Chicago a leader in emerging efforts to fight global warming, but city government is churning out more heat-trapping pollution every year.

I’m sorry. Should I have warned you to stow potables before providing that quote?

Forgive me, but you better do it now ‘cause it gets better:

The city pledged in 2001 to meet the target by planting green roofs, buying renewable power and rehabbing buildings to make them more energy-efficient, among other steps. Yet the city's emissions of global warming pollution have soared since then, according to records that the Tribune obtained under the Illinois Freedom of Information Act.

City officials have had some success reducing the amount of gasoline, diesel fuel and natural gas burned by government vehicles and buildings, records show. But those improvements have been more than offset by the city's surging demand for electricity, some of which is generated by burning fossil fuels that release carbon dioxide into the atmosphere.

The city's lack of progress highlights how the mayor's environmentally friendly speeches failed to translate into aggressive action at City Hall.

I’m having a hard time keeping a straight face. How ‘bout you? Alas, don’t pick up that drink yet:

[R]ecords show that emissions of greenhouse gases from city government have increased to more than 1 million tons, 10 percent higher than a baseline of 921,938 tons. The baseline is an average of emissions from 1998 to 2001 the exchange uses to measure future increases and reductions.

And here’s the delicious punch line that no media member outside of Chicago is likely to address:

So far, the city hasn't been required to buy more greenhouse-gas allowances, but records indicate the allowances the city has on hand are dwindling to the point that taxpayers could be required to make up the difference as early as this year.

Don’t go anywhere, yet. It’s going to get even better:

Records show that officials fell well short of targets for curbing electricity usage by city buildings despite the construction of energy-efficient buildings and the installation of green roofs across the city.

Yet electricity usage by city government last year was 22 percent higher than the 1998-2001 average that the Chicago Climate Exchange used as a baseline, records show.

Absolutely outstanding. So, because city officials couldn’t keep their own CO2 emissions in check, Chicagoans are likely to see their taxes raised.

As you would imagine, this is another fine example of how liberals want everybody to do as they say, but not as they do.

Think Katie, Charlie, or Brian will be reporting this any time soon?

Nah...neither do I. Regardless, cue Kermit: It's not that easy being green
Having to spend each day the color of the leaves
When I think it could be nicer being red, or yellow or gold
Or something much more colorful like that