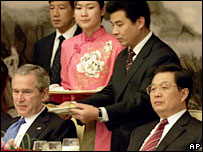 The American media are giving President Bush low marks and mixed reviews regarding his just ended trip to China. Here are some of today’s headlines:

Yet, the Chinese media were much more positive about Bush’s trip. For example, People’s Daily Online offered the following headline, “Media: Bush's China visit sends "positive signal" to China-US relations.” It conveniently gave a recap of opinions being expressed by other newspapers and websites with links:

“Many international and Chinese newspapers and news networks have shown great interest in the current China visit of US President George W. Bush, saying the visit has sent a ‘positive signal’ to China-US relations.

“The United Morning News of Singapore says that it is Bush's third China visit since he became US president in 2001. Bush's frequent visits reflect the historical changes in China-US relations and indicate that the world center is moving towards the east.

“A Beijing News editorial says that stable China policies of the United States serve as the foundation for developing secure China-US relations.

“A Macao-based newspaper notes that the Bush administration is re-defining China-US relations, namely shifting from the relationship of slightly hostile strategic competitors to that of more equal sharers of interests.”

Beyond this, China Daily, in an article entitled “China, U.S. to Cooperate on Yuan: Bush” reported:

“Without giving details, Hu said China would press ahead with the reform of the yuan and ‘join hands’ with the United States to gradually restore balance in trade between the two countries.

“‘The frictions and problems that may arise in this rapid development of two-way trade may be properly addressed through consultations,’ Hu said.

“China and the United States removed one of the thorns in the side of two-way trade ties this month when they agreed on curbs on the growth of Chinese textile exports until the end of 2008.”

“A Chinese scholar on Sino-US relations, Liu Xuecheng said this shows that the US China policy has undergone a transformation.

“‘A policy shift has been made when they dropped the words ‘strategic competitor’ to describe China. Instead, they call China now a ‘stake-holder’. This signals a major strategic transformation. Both sides are clear that consultation and dialogue instead of confrontation are the means to resolve differences.’"

What a difference a few thousand miles makes.