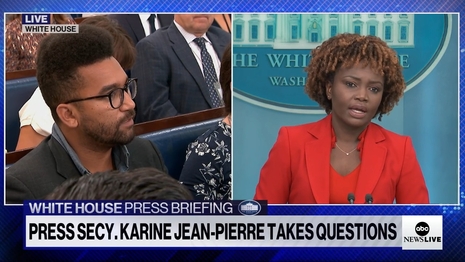 In the wake of President Biden’s extremely divisive Thursday night speech featuring tinges of authoritarian themes, the Friday White House press briefing was noticeably lacking critical questions about the dangerous rhetoric in the address. And with Press Secretary Karine Jean-Pierre skipping over tough questioners like Fox News Channel’s Peter Doocy, the few questions that were asked about the speech only addressed how “political” it was and why they decided to use Marines as props.

DIAMOND: The President last night argued very forcefully that democracy is under assault, but what kind of concrete actions does he actually plan to take given that he describes this as essentially — as an existential threat to the republic?

DIAMOND: So, other than urging Americans to vote and make their voices heard, the President has no plan to confront this threat that he described very forcefully last night?

DIAMOND: Right, but what I’m asking is if there’s any action behind his words.

Of course, Jean-Pierre’s responses were to present word salads and hope that they answered Diamond’s question.

The New York Times correspondent Zolan Kanno-Youngs was also very interested in what policy proposals Biden would enforce to go after the supposed GOP threat. “I understand the inspiration, the inspirational kind of motivation pattern there,” he said. “But, frankly, can the American people expect any policy rule out underlying the speech, yesterday, in the days ahead, to actually address the threat to democracy?”

Jean-Pierre responded by rambling on about how the speech was simply to smear Republicans in primetime and tell people to vote against them, or as she put it: tell them they had “a choice” in November.

Picking up on the White House’s spin of the speech, USA Today correspondent Joey Garrison pressed her on the “political” nature of the address:

Isn’t the speech in which the President concludes by saying, “vote, vote, vote” inherently political? He wasn’t referring to any candidates. He wasn’t saying vote for Dr. Oz. He was saying vote to reject the MAGA forces. I mean, isn’t that a political speech?

Getting close to asking about the optics and what was said, Voice of America correspondent Patsy Widakuswara worried about what the content of Biden’s speech said to the rest of the world:

President Biden laid out last night the problem that the country’s facing: division, sectarianism, polarization. What is his message to adversaries around the world who are looking at this and trying to leverage the division in the country and also allies who are dismayed at the state of democracy in the U.S.?

Absent from the briefing room were critical questions about the optics of the President being wreathed in blood-red lights and inky shadows while waving his fists in the air as he claimed over 70 million Americans were a threat to the country and enemies of the state. Online, these optics drew comparisons to Adolf Hitler, Joseph Stalin, V for Vendetta, The Hunger Games, the empire from Star Wars, and other popular media featuring authoritarian demagogues.

Diamond did dip into questions about the stagecraft of the speech, noting it “very much sounded like a politically charged speech as an official event” that was “taxpayer-funded, with two Marines in uniform, in particular, flanking him and visible on camera throughout his speech.”

“This was an opportunity in prime time to talk directly to the American people and to be very clear — clear — with a clear voice, to talk about what is happening in our country today,” Jean-Pierre danced around the issue.

Despite firing off a plethora of questions for days before Biden’s address, the liberal journalists in the White House press pool Friday weren’t too interested in following up after it happened.

To see the relevant transcript from the September 2's briefing, click here.