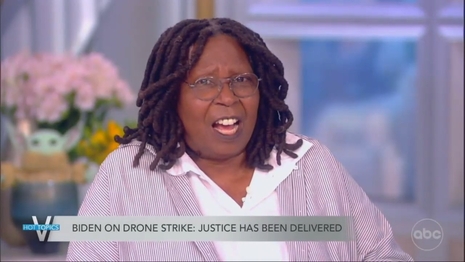 The day after news broke that Al Qaeda leader and 9/11 plotter Ayman al-Zawahiri was killed in a CIA drone strike approved by President Biden, the cackling coven of ABC’s The View danced around their caldron and suggested, without evidence, that Republicans are unwilling to kill terrorist leaders and only Democratic presidents are. They also threw a potent double standard into their brew by whining about who did and didn’t get credit for killing Osama bin Laden.

After playing a soundbite of President Biden’s address announcing the killing of al-Zawahiri, Joy Behar blurted out that “He’s like Liam Neeson” in the Taken series. “I will find you and I will kill you,” she quipped.

Whoopi Goldberg followed up by ignoring how Biden abandoned hundreds of Americans in Afghanistan and touted the botched withdrawal that resulted in American service members killed. She then erroneously suggests Republicans are unwilling to kill terrorist leaders:

“You know, this is what a president is supposed to do. Nobody knew anything about it other than the people who needed to know,” she added.

Goldberg’s fabricated assertion was not corrected by anyone. And this was especially ridiculous since the cast openly decried when former President Trump approved the killings of ISIS leader Abu Bakr al-Baghdadi and Qasem Soleimani of Iran’s Revolutionary Guard.

That brings us to the rank double standard Behar was bathing in.

Recalling “when Obama took out Osama,” Behar whined about how Republicans like Senator Mitch McConnell (KY), then-VP candidate Sarah Palin, Reince Priebus, and Rick Santorum “thanked the troops” instead of Obama. “So, they could not thank bring themselves to thank Obama for that. And I wonder, you know, how many will thank Biden for this moment,” she huffed.

But as NewsBusters has documented, when al-Baghdadi was killed in a raid by U.S. special forces under Trump, Behar couldn’t decide if the world was better with him in it or with Trump:

GOLDBERG: So can we at least agree that the world is a better place without this guy in it?

BEHAR: Who, Trump or Baghdadi? Which one?

And with Soleimani catching a warhead to the forehead, Behar shrieked about how it was just a distraction from impeachment:

Elizabeth Warren who's running for president, she says that said President Trump ordered Soleimani's killing to distract from impeachment. She’s not the only one saying that. They call this wag the dog, start a war to get distracted from the fact that you're ready to get impeached.

If she could make that case, then one could reasonably argue that Biden ordered the strike to distract from any one of the number of things plaguing his administration: inflation, recession, the anniversary of the botched Afghanistan withdrawal. She also needs to answer why al-Zawahiri was suddenly able to be in the heart of Kabul, Afghanistan, in one of the more affluent neighborhoods: Biden.

These smears and double standards against Republicans were made possible because of lucrative sponsorships from Olay and Chewy. Their contact information is liked.

JOY BEHAR: He’s like Liam Neeson, right? “I will find you and I will kill you.”

WHOOPI GOLDBERG: Now he took a lot of heat for pulling U.S. troops out of Afghanistan. And – I mean, does this not show that, you know, with drones, we apparently don't need boots on the ground to target terrorists.

I – You know, this is what a president is supposed to do. Nobody knew anything about it other than the people who needed to know.

GOLDBERG: And that's how this is supposed to work.

HOSTIN: Well, I think when you refer to the fact that these are Democrats that are doing it. You know, the take always is ‘Democrats are weak. Democrats are averse to war. Democrats won't do this kind of thing.’ And I think that does, in a sense, change a perception about Joe Biden.

And I read an article, I believe it was in CNN – on cnn.com, that talked about how specific Biden was, how granular he was when getting the Intel and making sure that this was the right move. Because he wanted to make sure no civilians were hit. And I think that shows you that not only is he a strong leader, he's a compassionate one. Right?

HOSTIN: And I think we need that, as well.

BEHAR: So – you know – it’s very hard to – you know – um – I just wanted to point out that when Obama took out Osama, his ratings rose to 52 percent.  He did very well immediately and that lasted about five weeks.

But people like Mitch McConnell, and Sarah Palin, and – um – remember Reince Priebus.

BEHAR: I always thought that was a strange name.

I don’t know what it means. It’s something about –

And Sarah Palin thanked the troops at the time. No word for Obama. Um – um— Rick Santorum, remember him? What Happened to him? He made a statement “all those involved for this historic triumph.” So, they could not thank bring themselves to thank Obama for that. And I wonder, you know, how many will thank Biden for this moment.

HOSTIN: I think that’s true. For some reason, there's a take that the Democrats are week. And that they are unwilling to engage.