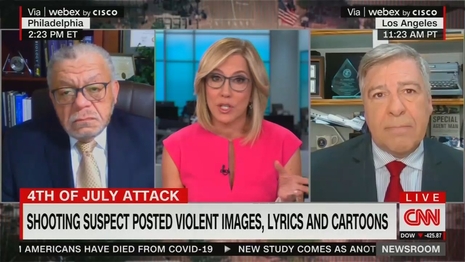 In the wake of the mass shooting in Highland Park, Illinois over the Fourth of July weekend, on Tuesday, CNN Newsroom co-host Alisyn Camerota proposed Orwellian laws designed to monitor and profile gun owners and bar them from exercising their Second Amendment rights. Yet surprisingly, she got some push back from a left-leaning former police commissioner and got schooled on how gun offenders were being released in some American cities under the guise of criminal justice reform.

Pulling away from an update on the White House’s response to the shooting, Camerota brought on former Philadelphia police commissioner Charles Ramsey and former FBI supervisory special agent Steve Moore. And as she transitioned to this discussion, she seemed to argue for profiling people that looked like the shooter, arguing, “these suspects … are starting to look alike.”

Sure the shooter might look weird, but the parameters she seems to be calling for profile people with include long hair and tattoos. Just based on that description, it seems like her scope includes many military veterans.

Ignorant of what steps are involved in purchasing a gun and with no consideration for the merchants, Camerota added in a huff: “is it too much to ask the gun seller to do a cursory check on social media?”

Moore had to explain how that idea could break some privacy laws. “Well, the problem is that they're not really asked to, and they're not really allowed to, in some ways. They are retail merchants,” he said, seemingly hinting at how unreasonable asking them to troll through social media accounts would be.

He went on to compare what she was demanding with putting the burden on liquor store owners to scrub through social media posts before making a sale. “The gatekeepers are the government, essentially. It is not the retail establishment,” he said.

This caused Camerota to launch into a rant where she compared gun store transactions to her time as a waitress. Again, Moore had to tell her how she was grossly inaccurate (Click “expand”):

CAMEROTA: I like that analogy, Steve. Because I used to be a waitress, and for a while, we were told to run up the alcohol tab on people – on customers who came in because you got them to pay more that way. Then the law changed, and you couldn't serve somebody who you knew had been drinking, because they were killing people on the highway. And so, once you recognize --

MOORE: That's a little different, though.

A couple of minutes later, Camerota whined as she proposed an Orwellian monitoring program to track gun purchases. “Is there no such thing as a database where a gun seller can look to see if somebody's recently, in the past day, purchased an AR-15? Would that help, commissioner?” she wanted to know.

So, Camerota’s plan seems to be to bar people who make an arbitrary number of gun purchases in an arbitrary amount of time with no consideration for how shopping works. That’s not to mention how this list of gun owners could be used as a political weapon. Just look at California where the attorney general’s office mishandled and dumped the private information of thousands of registered gun owners.

“Well, it would help if there was some kind of database, but also, where's the law that says you can't buy, you know, guns in different places? I mean, we need to really sit and think through what we want. What's the balance?” Ramsey scoffed at Camerota’s idea.

Ramsey went on to call out how her ideas are to take drastic action against people who have committed no crime:

I mean, you know, Steve mentioned, how much intrusion do you really want from the government in terms of looking at your Facebook page, or what have you? I mean, where's the balance? And we've got to find the balance, because, you know, there are a lot of people that have crazy stuff on the internet, but they don't act it out. And so, how far do we really want to go?

Although, he does say “the laws just need to be changed.”

Proving just how deep she lived in the liberal media echo chamber, Camerota’s mind was blown when Ramsey informed her that some American cities were releasing offenders charged with gun crimes (Click “expand”):

RAMSEY: [I]t's not just the guns, it's the idiots that use guns to commit crime. And some of these guys just need to be in jail when they get caught using a gun to commit a crime or carrying a gun illegally.

I mean, I know that's not popular to say right now, we want to treat everybody with care—

CAMEROTA: But wait a minute. Hold on. But hold on, commissioner. Just help us understand that. You're saying that somebody who uses a gun in the commission of a crime is not going to jail?

RAMSEY: There are some that are being -- we've got people right now that are out on the street that have got pending cases against them for various gun violations, assaults, things of that nature. I mean, that's not uncommon. It is not uncommon. Not in every city, but in many cities, that's what's going on right now. There's no question about that.

These Orwellian proposals by CNN were made possible because of lucrative sponsorships from Liberty Mutual and The Farmer’s Dog. Their contact information is linked.

To read the transcript in a PDF format, click here.