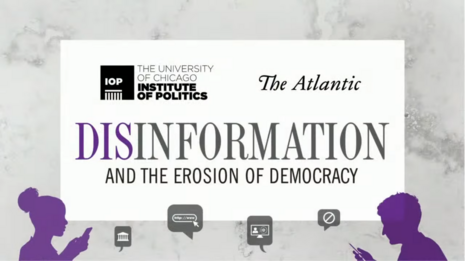 Between last Thursday and Friday, the left-leaning Atlantic magazine and the Democratic-connected Institute of Politics (IOP) of the University of Chicago held a conference to warn and find solutions to so-called “disinformation.”

Following two viral moments with liberal speakers, NewsBusters reached out to Daniel Schmidt and Chris Phillips, who sparked said headlines with questions about Hunter Biden’s laptop and other instances of media disinformation; and they say it appears the liberal media were not interested in fixing their broken system.

On the first day of the conference, Schmidt, senior editor for the conservative/libertarian campus publication The Chicago Thinker, attended a discussion with Anne Applebaum of The Atlantic and IOP head David Axelrod. During a Q&A period, he took his turn to ask about Hunter Biden’s laptop:

Now, of course, we know a few weeks ago The New York Times confirmed that the content is real. Do you think the media acted inappropriately when they instantly dismissed Hunter Biden’s laptop as Russian disinformation? What can be learned from that and ensuring that what we label as disinformation is truly disinformation and not reality?

Applebaum’s reaction should lead to questions about her news judgment since she found the story “totally irrelevant” and didn’t “find it to be interesting.”

WATCH The Atlantic’s @anneapplebaum refuse to answer @RealDSchmidt's🔥🔥 question about Hunter Biden’s laptop during @UChicago’s “Disinformation and the Erosion of Democracy” conference! pic.twitter.com/1OgXBBiiI0

Schmidt told NewsBusters he thought Applebaum would’ve “at least admit the media made a mistake in immediately declaring” the story “Russian disinformation.”

This interaction with the campus’s “premier publication” seemed to have rubbed Applebaum the wrong way, seeing as The Chicago Thinker reported she blocked them on Twitter.

From his position standing in the crowded room, Schmidt described the reaction as, “practically half the room looking at me like I just said a bunch of cuss words. It felt like what I asked is off-limits and should not be brought up again.”

Although, he noted he’s been approached by other students on campus from different political persuasions who felt he asked a “very fair question and that Applebaum's answer was insane.”

Phillips, who also writes for The Chicago Thinker, made a splash on day two when he torched CNN’s Brian Stelter by calling out CNN as a hotbed of disinformation:

You’ve all spoken extensively about Fox News being a purveyor of disinformation. But CNN is right up there with them. They pushed the Russian collusion hoax, they pushed the Jussie Smollett hoax, they smeared Justice Kavanaugh as a rapist, and they also smeared Nick Sandmann as a white supremacist, and yes, they dismissed the Hunter Biden laptop affair as pure Russian disinformation.

In his deflection and non-answer for the camera, Stelter said he wanted to speak to Phillips when the panel was over. Phillips recounted to NewsBusters how a “group of 12-15 people formed” around them as Stelter proceeded to “gaslight” him.

According to Phillips’s description of the conversation, it seemed as though Stelter essentially did his Twitter shtick of rattling off instances where he purports that CNN covered certain stories but doesn’t address the liberal tilt:

He was very spirited and uplifting when answering my question on the panel, but when he was off camera, he acted like the complete opposite. He began spouting off dates of when CNN reported on various stories, and began asking me things like "So what did CNN lie about again?" "When did we say that?" "No, we actually covered that story!" "So we shouldn't cover a story if we think it's legit?"

He delivered several quips like this in a 12 or so minute back-and-forth that were meant to gaslight me and use dishonest tactics and logical fallacies to convince anyone listening that CNN was not full of disinformation.

Stelter seemed to slip when Phillips again brought up Hunter’s laptop and admitted that CNN only recently started investigating it:

At one point I asked him again about the Hunter Biden laptop affair, and he told me something like "Actually, just five days ago, CNN launched a fairly big investigation into the laptop story and covered it on air," to which I replied, "Of course they did, because the NYT just recently confirmed the legitimacy of the contents of the laptop." He didn't have a great answer for that, which goes to show how dishonest the tactics he was using really were.

As for the response from the room, Phillips said he received “side glances as well as full-on looks,” which he chalked up to shock that a tough question like that was asked. Although, he said “[a] few people of various ages come to me and shake my hand and congratulate me on a well thought out question.”

He said he even received support from some of his more liberal peers:

However, many people have been supportive of the question I asked. For instance, Daniel and I were in the dining hall not long ago, and someone came up to us and said that although she typically disliked what we had to say about politics, she liked our question because we called out the corporate Democrats, a group who she was deeply opposed to.

Phillips was also “not optimistic” going into the event citing the fact it was organized by Axelrod and panelists included Stelter, former President Barack Obama, Senator Amy Klobuchar (D-MN), and Congressman Adam Kinzinger (R-IL). But he told NewsBusters he “wanted to give them the benefit of the doubt[.]” But he suggested the talk of wanting the media to get more credibility was just to “score some points[.]”