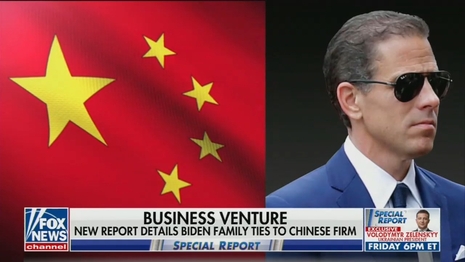 On Wednesday, the Washington Post finally got around to confirming what the rest of us have known since the fall of 2020: the Biden family is corrupt and Hunter Biden is the funnel for international funds and is involved with other illegal activities (here’s the NewsBusters breakdown of their two reports). But despite a staunch liberal rag confirming the story, the primetime hours of CNN and MSNBC completely hid the story from their viewers.

The only cable outlet to mention Hunter in primetime was MSNBC, but they refused to mention the Washington Post stories. The first instance occurred on All In With Chris Hayes. And in that case, it was guest and faux conservative George Conway using him as a way to take a swipe at former President Trump:

You’re sitting next to somebody on the plane, or on the bus, and they’re just talking about wacky things that don't affect you. And that is what he has been doing. And you know, he seems to be deteriorating in this regard.

The other day – what he’s asking Putin to release all of the materials on Hunter Biden? I mean, what? You know, we’re in the middle – Putin is killing civilians in Ukraine, and all Donald Trump cares about is, ‘hey, you may not like Joe Biden because he is trying to help you from killing civilians, so hey, let's talk about Hunter Biden, give us all your stuff on Hunter Biden.” I mean, it’s just absolute lunacy.

This happened near the end of the show and Hayes clearly didn’t want to get into it.

Two hours later, on The Last Word, host Lawrence O’Donnell at least had the courage to bring up Hunter himself to take the swipe at Trump:

As we reported on this program last night, yesterday, in an interview, Donald Trump asked Vladimir Putin to release information about Hunter Biden’s business dealings. Donald Trump said, “I would think Putin would know the answer to that. I think he should release it.”

But again, no mention of the Washington Post’s reports.

Primetime is 8:00 p.m. Eastern Standard Time to 11:00 p.m. And CNN’s final mention of Hunter for the day came during 7:00 p.m.’s Erin Burnett Outfront. And as with the mentions on MSNBC, it was all about taking a swipe at Trump and not addressing the fact the scandals were again confirmed by a liberal newspaper:

BURNETT: So, Paul, in the context of all of this, former President Trump spoke out and he was, you know, talking about Hunter Biden. And he was saying -- he said, quote, “I would think Putin would know the answer to that,” referring to his allegations about Hunter Biden. And he continued to say, “I think he should release it. I think we should know that answer.” Right?

Talking about that Putin should release, you know, everything that he knows about the Bidens. You believe these words matter. Tell me why.

She was speaking to Paul Kolbe, the former chief of the CIA’s Central Eurasia Division. In his answer, he went off on Trump for playing games while hero President Biden was trying to keep us out of WWIII while balancing support for Ukraine.

This deliberate omission from the cable outlets came after the broadcast networks finally broke their 261-day silence on the Hunter Biden scandals with ABC defending him and NBC avoiding the Washington Post reports while also making it about Trump.

And over on CBS, they relied on a former Fox News Channel correspondent, who had been all over the story from the beginning, to do the hard work of reporting on what they once suggested was a Russian plot, without evidence.

The cover up was made possible because of lucrative sponsorships from DirecTV, Consumer Cellular, and Leaf Filter on CNN, while MSNBC was sporting E-Trade, Prevagen, and Farmers Insurance. Their contact information is linked.