In an interesting “scoop” published Saturday, Axios reported that CBS’s EVP of Special Programming Chris Licht, who was tapped to replace ousted CNN boss Jeff Zucker to lead the third-place cable network, wants to get back to CNN being a straight news outlet and cut back on the liberal screeds that dominate prime time and their newscasts in general.

The Axios headline said it all: “CNN to dull its liberal edge.” “Under new chief Chris Licht, CNN will dial down the prime-time partisanship and double down on the network's news-gathering muscle,” reported Mike Allen and Sara Fischer.

According to Axios, Licht was picked by Warner Bros. Discovery CEO David Zaslav because “[r]atings are secondary to credibility[.]” 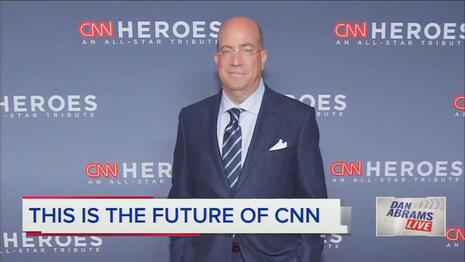 Both of which are foreign concepts to CNN currently.

“Axios is told that Licht and Zaslav share a view that CNN was chasing prime-time ratings at the expense of the brand,” the writers said in their “between the lines” section. “Zaslav wants to move CNN back to the middle.”

They also noted Licht’s history of making some popular programming seeing as he’s the “showrunner of The Late Show with Stephen Colbert” and “succeeded with three very different programs.” Those programs included Colbert, the “ratings jolt” for CBS Evening News, and “co-creator” of Morning Joe on MSNBC.

This history alone is enough to raise doubts about the seriousness of this desire to have CNN blunt their liberal programming.

Of course, CNN media apologist Brian Stelter did his best to ingratiate himself with his new boss, especially since Stelter was Zucker’s personal hatchetman. “Licht has more than two decades of television news experience. He has a reputation as a hands-on producer and talent manager with a keen interest in politics and news,” he hyped.

Stelter further complimented Licht by saying he brought “fresh eyes to CNN, mirroring what sources said at the time of Zucker's exit: That Discovery executives view Zucker's departure as a ‘fresh start’ for the news organization.”

“CNN's up-to-the-minute coverage of the war has won praise from Discovery executives in recent days,” Stelter added, touting their coverage of the Russian invasion of Ukraine.

But Axios has some bad news for the network as they reported the “Discovery team has expressed skepticism about the roster size for CNN+” and “[s]taff is bracing for CNN+ to shrink before it even launches this spring” because of all the “expensive talent” they were throwing at it.