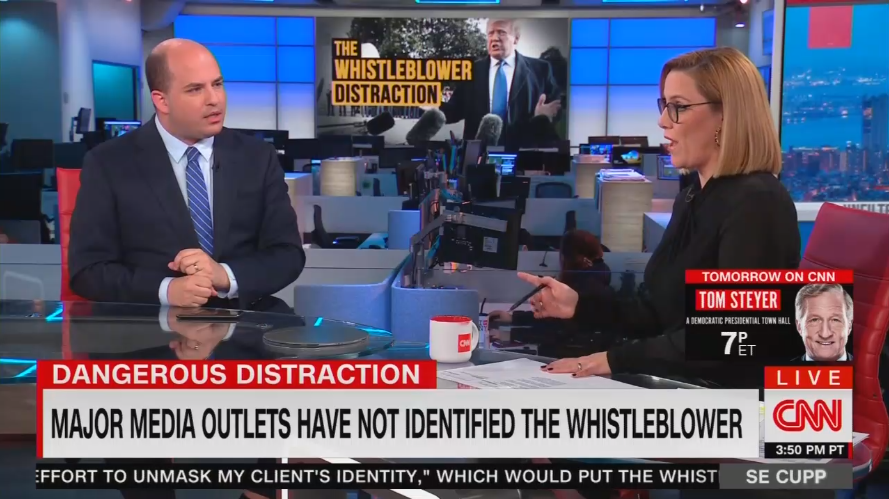 “Ignorance is strength.” That’s one of the three infamous “slogans of the Party” featured in George Orwell’s novel 1984, in which Big Brother edits the news to manipulate the populace. Well, it was that kind of authoritarian action CNN shills S.E. Cupp and Brian Stelter were celebrating, during Saturday’s edition of Unfiltered, when it came to social media giants Facebook and YouTube scrubbing the name of the alleged whistleblower responsible for impeachment.

Amid the dubious duo decrying those on the right who wanted to expose the name of the alleged whistleblower as Eric Ciaramella, because of his long history of working for Democrats, Cupp was concerned about how the media should cover it if a lawmaker spilled the name. “If President Trump or any other elected official chooses to expose the whistleblower as they seem to be threatening, how do you think the media should handle that?”

Meanwhile, the reporting by RealClearInvestigations suggested CNN, every major news outlet, and nearly every lawmaker on Capitol Hill already knew the name, with some dropping the name at hearings, including one public hearing.

Stelter thought it was “striking” and “remarkable” that social media sites like Facebook and YouTube decided to target those who informed the pubic of Ciaramella and remove their content. This author was one such person targeted.

“Facebook, for example, is saying, ‘Any mention of the name,’ the potential person's name, ‘violates our coordinated harm policy which prohibits outing of a witness or informant or activist,’” Stelter touted. Chiding: “However, being responsible feeds into the GOP or the right-wing narrative that there's a cover-up going on.”

Looking further at 1984 (this author keeps a copy on his desk), this uncanny order was sent to main character Winston Smith while working for the so-called “Ministry of Truth” (emphasis added): “The reporting of Big Brother’s Order of the Day in the Times of December 3rd 1983 is extremely unsatisfactory and makes reference to nonexistent persons. Rewrite it in full and submit your draft to higher authority before filing.” Eerie, isn’t it?

A way to erase reporting about a person you don’t want the public knowing about is to discredit the source. And that’s just what Stelter tried to do. Despite the fact the RealClearPolitics network of news sites was highly reputable, CNN’s chief media correspondent lumped them in with pundits like Sean Hannity (one of Stelter’s unhealthy obsessions).

Feeding into the craziness propagated by CNN, at one point, Cupp seemed to suggest Republicans who wanted Ciaramella’s name out there wanted him killed. “Here, the media is refusing to aid and abet Republicans who seem to just be out for blood,” the once rational CNN host declared without evidence.

A short time later, she noted a guest on Fox News used Ciaramella’s name and pressed Stelter on whether “hosts should be held accountable for what their guests say?” It was a sore subject for Stelter because he once invited two unethical shrinks onto his show (so-called Reliable Sources) to diagnose President Trump with a mental illness and claim he’s killed more people than Hitler, Stalin, and Mao combined. Stelter failed to push back and has refused to publically refute the claims. The network also promoted the moment.

If Cupp thought Republicans wanted “blood,” who knows what kind of twisted punishment the unhinged CNN host was thinking up.

S.E. CUPP: All right. Let's make something clear. The whistleblower is protected by law. He's also kind of unnecessary to this investigation now that officials have corroborated all of the complaints he laid out.

OK. With me now is CNN Chief media correspondent and anchor of Reliable Sources, Brian Stelter. Brian, as you know, every major news outlet has refused to publish the name of the whistleblower. Even Fox News, as you reported, told their hosts and personalities do not identify the whistleblower. Here, the media is refusing to aid and abet Republicans who seem to just be out for blood.

BRIAN STELTER: And I think that's partly because it's very, very hard if not almost impossible to confirm the name of whoever this was.

Look, news outlets may think they know the whistleblower was, they may have some evidence. I certainly don't know. I don't think most journalists know who it is. But certainly the Sean Hannities of the world have been claiming they know who this whistleblower is.

If I'm the first person to spot a fire on the horizon, but then everybody else notices the fire and the fire fighter show up and the fire is being fought, then what's the point of identifying the original fire witness, it's irrelevant. I understand though why for political reasons it makes for an interesting argument. I get that. But I hope people and I think most people do see through the smoke.

CUPP: Well, so sticking with the media on this, if President Trump or any other elected official chooses to expose the whistleblower as they seem to be threatening, how do you think the media should handle that?

STELTER: It is striking that Facebook and YouTube, for example, have said, "Hey, we're going to make sure the posts that are claiming to identify this person don't show up in your feeds either."

STELTER: Facebook, for example, is saying, "Any mention of the name,” the potential person's name, “violates our coordinated harm policy which prohibits outing of a witness or informant or activist.”

STELTER: That is a remarkable position for these big tech companies to take.

STELTER: I don't think they would be talking that way a few years ago.

STELTER: So, we see a number of different institutions trying to be responsible in this situation.

STELTER: However, being responsible feeds into the GOP or the right-wing narrative that there's a cover up going on.

STELTER: They said, "The whistleblower must be a Democratic spy." Right?

CUPP: And that the media is with him, yeah.

STELTER: It's a double-edged sword, isn't it?

CUPP: Well, so a guest on one Fox News show named a person he thought was the whistleblower on air. Do you think hosts should be held accountable for what their guests say?

STELTER: I thought it was strange that the host didn't say anything in that moment. I've been in this situation where a guest says something, you're the host, you don't catch it. You're embarrassed by it later. Maybe that's what happened in this case.

STELTER: Even though the Sean Hannities of the world do want to, I guess, blur out whatever name they think applies. I guess at the heart of this, it's an attempt to deflect and distract. And it can seem like a petty game, but I think there's a layer where this is dangerous because it's ultimately about disinformation. There's a disinformation campaign trying to get away from the core of the story.

CUPP: Yeah. Well, and I want to talk more about that with you, so don't go anywhere. We'll be right back.