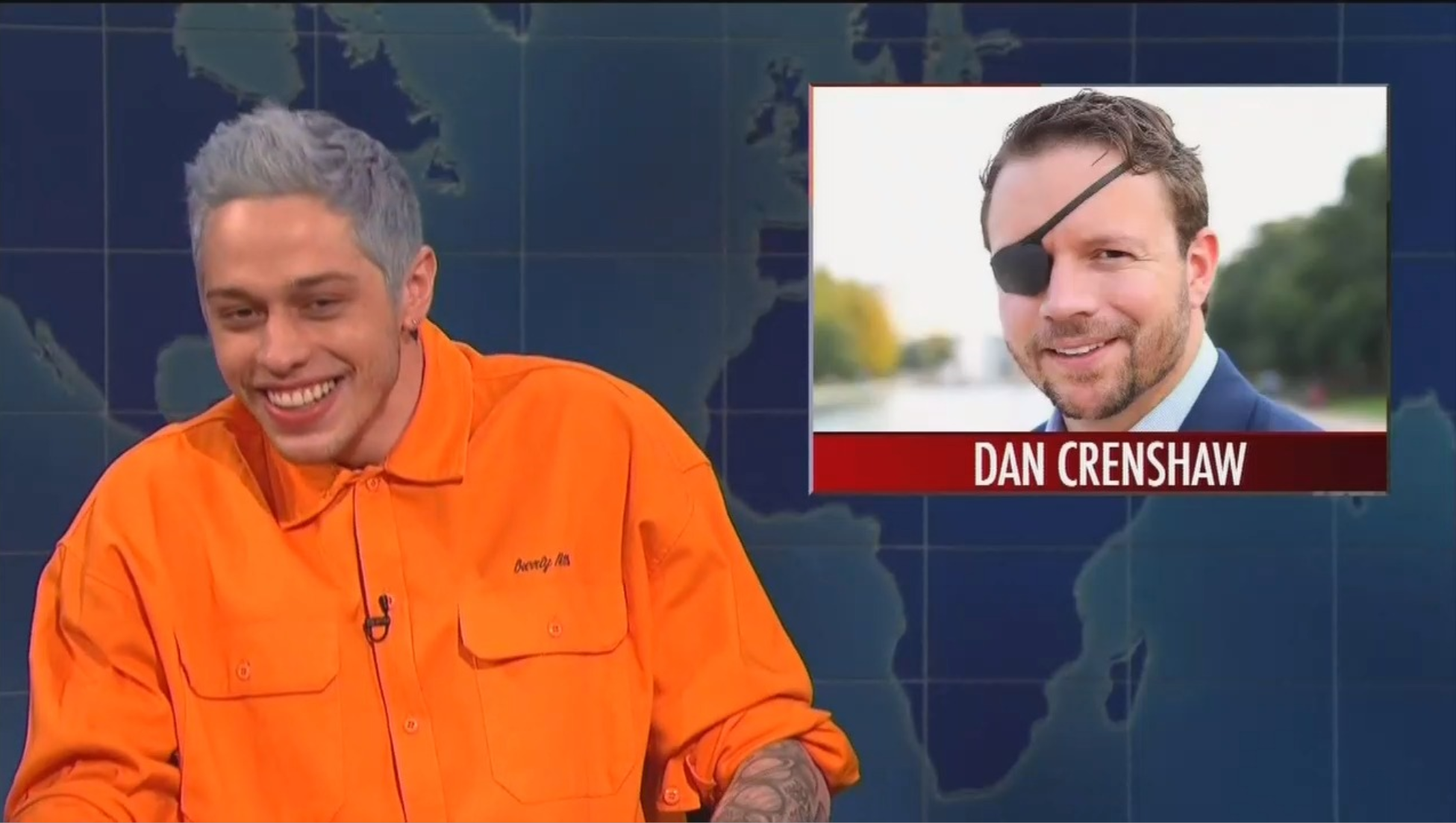 [This post has been updated with GOP candidate Dan Crenshaw's response to Saturday Night Live and more on how he lost his right eye.]

Since the Vietnam War, liberals have been known for their great disdain for America’s service members, despite their efforts to hide it. During NBC’s latest edition of Saturday Night Live, that disdain poked its ugly head out in the form of supposed comedian Pete Davidson mocking Republican congressional candidate and former Navy SEAL Dan Crenshaw about the eye he lost to an IED blast while serving in Afghanistan, “or whatever” according to the funny man.

The vile attack came during the SNL’s faux news segment “Weekend Update” where Davidson was mocking multiple Republican politicians for their looks. The comedian stated he’d “realized there are some pretty gross people running for office this year”. When a picture of Crenshaw was put on the screen, co-star Michael Che blurted out: “Oh, come on, man!”

“Or whatever” proves NBC, SNL, and Davidson clearly have no honor or decency, especially considering the jokes on the show get pitched, edited, and reviewed. Crenshaw’s campaign website tells the story of how he lost his eye and his sight, but kept fighting:

On Dan’s third deployment in 2012, his life changed forever. After six months of combat operations, Dan was hit by an IED blast during a mission in Helmand province, Afghanistan. He was evacuated and awoke from his medically induced coma learning that his right eye had been destroyed in the blast and his left eye was still present, but badly damaged. Dan was completely blind and the doctors did not believe he would ever see again.

The website also noted that “[a]fter several difficult surgeries, he eventually regained sight in his left eye” and “refused to quit and went on to deploy twice more, first back to the Middle East in 2014 and then South Korea in 2016.”

While he took shots at four Republican candidates, Davidson reluctantly took a shot at New York incumbent Governor Andrew Cuomo. “Here's a Democrat, so I look fair. Give me that Cuomo guy,” he said.

Davidson also mocked his own looks. “Don't get me wrong. Look, I'm not insane, I know I shouldn't be making fun of how anyone looks,” he admitted. “I look like I make vape juice in a bathtub. I look like a Dr. Seuss character went to prison.”

As for his shots on those other GOP candidates, he suggested Florida Senate candidate Rick Scott “looks like someone tried to whittle Bruce Willis out of a penis.” New York Congressman Peter King “looks like if a cigar came to life”, while Greg Pence (the bother of Vice President Mike Pence) was “a Ken doll that spent a year in the river” who apparently shouldn’t be allowed to smile. This is “funny” according to NBC.

In a statement made on Twitter, Crenshaw responded to SNL's humor, saying: "Good rule in life: I try hard not to offend; I try harder not to be offended. That being said, I hope @nbcsnl recognizes that vets don’t deserve to see their wounds used as punchlines for bad jokes."

Crenshaw did an interview with our friends at the Daily Caller earlier this year, where he explained how he came to have his right eye taken from him. "One of our Afghan interpreters stepped on a pressure plate right in front of me," he said. "About 15 pounds of explosives dismembered him right in front of my face. It blinded me, shattered me and knocked me over."

MICHAEL CHE: As we said, the midterm elections are next week. Here with his first impressions of some of the candidates is Pete Davidson.

PETE DAVIDSON: Hey, Che. So, the midterm elections are obviously a big deal. And after I had to move back in with my mom, I started paying attention to them. [ Laughter ] She’s loving it. And I realized there are some pretty gross people running for office this year, so here are my first impressions. This guy is fun. Rick Scott from Florida. He looks like someone tried to whittle Bruce Willis out of a penis. [ Laughter ] Here's a New York guy, Peter King. I actually don't know a lot about him, except he looks like if a cigar came to life. [ Laughter ] This guy is kind of cool, Dan Crenshaw. [ Laughter ]

DAVIDSON: Hold on. You may be surprised to hear he's a congressional candidate from Texas and not a hitman in a porno movie. [ Laughter ] I'm sorry, I know he lost his eye in war or whatever. [ Laughter ] Whatever. Here's a Democrat, so I look fair. Give me that Cuomo guy. There he is. Yeah. All right. So, Cuomo, he looks like a guy who’s sleeping with your mom but stays overnight and eats breakfast with you in his boxers. And then he asks you how the baseball is going. And you say, "you don't play baseball." And he goes, "Oh, queer." [ Laughter ]

CHE: That is -- that is very specific.

DAVIDSON: That's just the vibe I'm getting. Here's someone who really gives me the creeps, Indiana congressional candidate and Mike Pence's brother Greg Pence. This is a picture of him walking the episode of This Is Us where Jack dies. [Picture of Greg Pence smiling] [ Laughter ] Just so you know, he's actually running as the faith-based conservative [gets tripped up] [ Laughter] He's running – What? You never messed up at work before. As faith-based conservative and not a Ken doll that spent a year in the river. [Laughter] Still landed. Still worked. Don't get me wrong. Look, I'm not insane, I know I shouldn't be making fun of how anyone looks. [ Laughter ]

I look like I make vape juice in a bathtub. I look like a Dr. Seuss character went to prison.